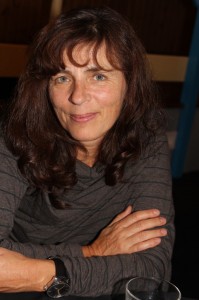 Mira Furlan played Delenn in Babylon 5 for which she was awarded the Sci-Fi Universe Award for Best Supporting Actress in a Genre TV-series in 1996 and 1997. She also played Danielle Rousseau in Lost. Mira has significant credits in theatre and television in Yugoslav, Croatia and America. She’s won all the highest awards in her country, including two Golden Arenas, the Yugoslav Oscars.

Thanks to Armageddon Expo, Mira Furlan spoke to Nalini Haynes of Dark Matter Zine. The video interview is below. The audio-only version will be coming soon.

Two years ago I interviewed Bruce Boxleitner who was energized about Lantern City. Now IMDB says you’re in Lantern City. What can you tell us about this long-awaited project?

IMDB also says you’re in Space Command Redemption with some old colleagues of yours. What can you tell us about that?

You played Delenn, the Minbari priest, from the pilot of Babylon 5 until the recent reunion. What have you enjoyed most about playing Delenn? What was least enjoyable?

After Babylon 5, you played Danielle Rousseau in Lost, a recurring character who appeared intermittently. What was Lost like for you?

Before and after your success in these two TV series, you featured in non-English-speaking TV and movies. Apart from the language, what is different about working in the TV and movie industry in different countries?

How have the people of your native country responded to your American success?

What does the future hold?