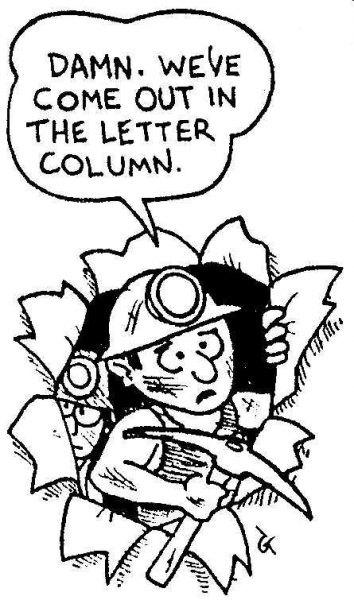 ‘Miner’ is one of many silly illos drawn by Ian Gunn to decorate science fiction clubs’ newsletters, intended to amuse readers.

Remember, if you can, the days of old when miners used picks and dug by hand.

(Before tens or hundreds of people pick up their tiki torches and pitchforks, I realise some newsletters are still in paper format and some still feature letters instead of online replies. I find this mind-boggling since it’s possible to have an almost-real-time conversation online whereas writing letters to the editor and being published in paper format requires wait-times of weeks or months.)

I’d like to update illos like this: perhaps change the words to indicate the comments column or something current, and definitely turn the image into a gif. But for that I’d need permission. And to ask permission would require an actual commitment on my part: It’d take me days to do it justice alongside learning how to manage the software. Perhaps I’ll think about it. Perhaps I’ll actually finish my novel instead.