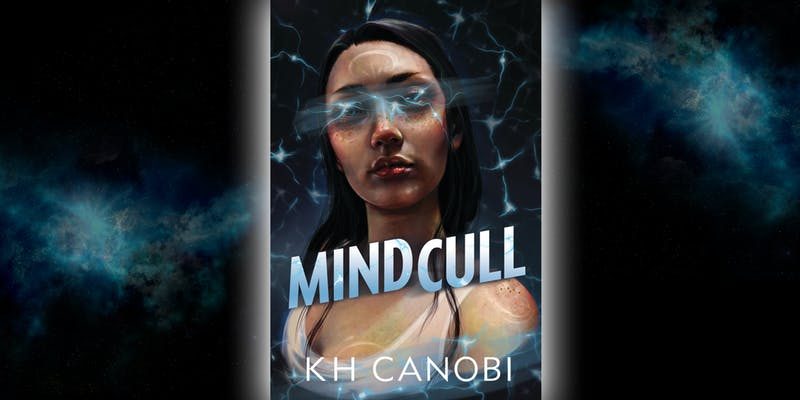 Mindcull is launching on 30 May 2019 at Robinson’s Bookshop in Melbourne!

Eila is invited to a Big Brother House type event for vloggers in this near-future speculative fiction novel. Although Eila is 16 and the other contestants are adults, Eila goes alone. With some kind of NSA-type agency bullying her into wearing spywear, Eila showers with her eyes closed to prevent them seeing her naked.

Mei is Eila’s best friend and, as it turns out, the genius behind the technical aspects of Eila’s clips. Regardless, Mei acts as PoC sidekick and bestie.

In the opening pages, this brave new world introduces a ‘discordant’ character (can anyone say ‘divergent’?!). Discordant people have become so addicted to virtual reality that they’ve had a psychotic break from reality or, alternatively, they appear to have schizophrenia. Eila’s father is a discordant before he disappeared.

Between the Resistance fighting the Big Brother–type government, industrial espionage and international conspiracies alongside abusive government spy agencies, Mindcull seems to have it all. It’s a shame there’s so much ‘telling’ instead of more ‘showing’, which increases Mindcull’s melodrama and reduces its thriller credentials.

Action-oriented storytelling doesn’t allow technical aspects to interfere with actiony-action. A six-year-old battles giants in VR while simultaneously hacking the program’s code and successfully covering his tracks. I applaud fun action sequences but the ‘gifted child’ plot device is tired and flawed. Even gifted children are still children, speaking as the mother of a gifted child who completed grades 8, 9 and 10 in 2 years in a class of gifted (advanced) students. Capacity for learning and aptitude in specific areas do not an android make.

And ‘Mindcull’! What’s in a name, you say? Well, an evil plot lends its codename as a title for this book, which is a misnomer. The intent of the plot was to take over minds using telepathy/technology, not to cull them. If people die it is a program flaw in the evil plot, leading to the cool book title.

Heaps of times Eila and Mei avoid surveillance by pretending to enter a virtual world then taking off their headsets. This happens so often and for so long without them actually talking that I would have been checking up on them. Speaking as a parent and not as a suspicious spy handler running an unwilling agent. Also, in the Big Brother House, organisers told contestants not to take off their cameras (contact lenses) and audio (earbuds) so the organisers can record everything then create publicity footage. But the contestants take them off and turn them off. Eila even leaves hers in her bedroom. Like that’d fly. “You’re on notice! Now you’re disqualified!!!” Opportunities were lost to explore privacy vs publicity, personas and presentation.

These teachers notes are comprehensive, inspiring for a grade 6 English/STEM or grade 7 or 8 English class. I’d like to see a few points added to these notes to encourage discussion of bullying, individuals’ rights, the psychology of Big Brother and other reality TV scenarios, and nudity. Classes can start with Eila avoiding spyware images of her nude then expand to ‘should we send people intimate selfies and why/why not?’ If you’re concerned about introducing these topics to upper primary and middle school children, it’s time to listen to these kids. They’ll shock you.

This YA book reads like it’s aiming at the younger end of the YA spectrum although it began with more diverse promise and the teacher’s notes provide an interesting English/STEM overlap. Mindcull is published by Ford Street. Ford Street are continuing their programme of providing teacher’s notes and, I assume, authors visiting schools to speak to kids, teachers and librarians. Mindcull will do well with upper primary and middle school readers. Part Divergent, part surreal VR story, I would have devoured this book at that age.