Elizabeth is locked in the Tower of London while her cousin, Mary Queen of Scots, vies for the throne. Elizabeth is later released from the Tower and takes the throne; it’s a matter of history but does the historical record tell us all? Or did Elizabeth make a pact with the Fae to take her throne?

Michael Deven, an impoverished social climber from a trade background, joins the royal court. To secure his career, he offers his services to Walsingham who is convinced Her Majesty is being influenced by an unknown force. Deven investigates.

Lune is currently out of favor with Invidiana, the Fae queen, because she was sent to the underwater realm to negotiate a treaty and, apparently, offered too much in return for the water fae’s assistance in destroying armadas crossing the channel. She’s trying — and failing — to shore up her position at court. In a desperate attempt to win back the Fae queen’s favor, Lune returns to the Elizabethan court to spy on Walsingham. Unfortunately, he disdains women so it’s difficult to gain access. Lune has a dalliance with Michael Deven to open the lines of communication…

Marie Brennan has followed in Tim Powers’s footsteps, taking historical events and developing an underlying supernatural cause. As historical fiction, the machinations of Elizabeth’s court are delightful. As fantasy, the deviousness of the Fae creates layers and mysteries that even perplex Lune.

Historical fiction — in old movies and novels — fascinated me from high school onwards. One of the early historical fiction novels I read (after books about Cleopatra and Ancient Egypt) was a tragic romance about the Earl of Essex and his illicit marriage. Midnight Never Come incorporates those events in passing as fan service.

Although history gives us an idea of what to expect in the human realm, especially concerning historical figures like Walsingham and the Earl of Leicester, the Fae undercurrent builds mystery and tension. Midnight Never Come is a real page-turner. The end is satisfying, with the tower scene at the beginning echoed in the final scene.

I highly recommend Midnight Never Come to readers who enjoy historical fiction and high fantasy. Others agree. SFX says “Brennan’s plotting is stronger than Gaiman’s”. Fantasy Book Critic says “Spectacularly researched, beautifully imagined and utterly charming… magical and spellbinding.” There’s nothing left for me to say except “read this novel”. 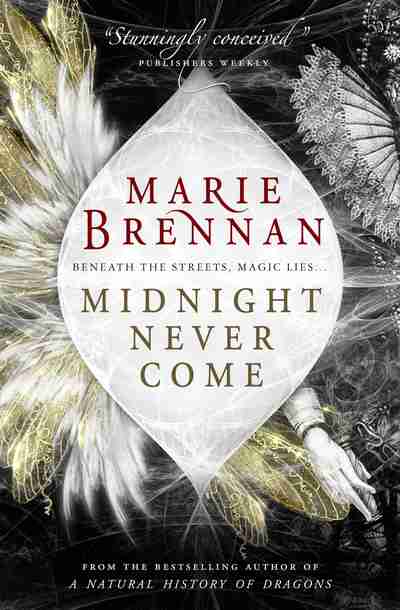