Joffrey looks set to top Aegon as the maddest king. His latest plot is to have Rob Stark’s head brought hither so he can serve it to Sansa at her wedding. No one else is amused but it’s Tyrion who challenges Joffrey and bears the brunt of his ire.

Tywin and Tyrion have a brutal conversation where Tyrion challenges his father, asking what Tywin had ever done ‘for the family’ that was against Tywin’s own self-interest. The answer is obscenely brutal. For once, Tyrion is speechless.

Full of concern, Tyrion goes to see Sansa. She may have been a little upset.

Meanwhile, Bran and co arrive in the abandoned castle. After failing to find a way through the wall, they bed down in a room with a well.

Hodor talks into the well, his voice echoing, bringing to mind another scene with a well. ‘FOOL OF A TOOK, THROW YOURSELF IN NEXT TIME’. We wait for the creepy to appear…

Scuffle, clunk, the creepy is coming.

A furry mound emerges from the well. Meera tackles it, holding a blade to — Samwell’s face.

Sam realises Bran is Jon Snow’s brother so he promises to do ANYTHING to help.

ANYTHING, except that. Sam isn’t going north again, not for love nor money. However, he shows Bran and co the way north before he walks the miles to Castle Black to beg a home for Gilly and the baby from Maester Aemon.

Jaime Lannister and Brienne of Tarth arrive in Kings Landing. A peasant is rude to Jaime, who’s shocked at not receiving the respect he feels he’s due. Brienne is amused, pointedly looking at Jaime, who surveys himself, shrugs and walks on.

Daenerys greets the former slaves of the city she’s just liberated. They call her mommy so she leaves her bodyguard and walks among them.

The season closes with a shot looking down at Daenerys in the middle of a crowd, people reaching towards her, calling her Mhysa (meaning ‘mother’).

Although this is a beautiful image of people reaching out and thanking their savior, I worry that it’s also quite colonial: a crowd who are mostly people of color are reaching towards the white savior, willingly subjugating themselves to her. That music I hear is the screams of slaves and victims muffled, muted, melded to become echoes, history’s melody as played by the victor.

Don’t let the weekly scheduling of these reviews fool you, I burnt through this season. Re-watching helps me stand outside the narrative to critique more objectively instead of being sucked into the story, especially after I’ve had a break from Game of Thrones.

Game of Thrones is a soapie, it’s just more compelling than most soapies or other long-running TV series. The series aims for drama rather than melodrama — most of the time. Any scene with Ramsay Snow or Theon Greyjoy reeks of melodrama. (Pardon the pun.)

Knowing that there are, so far, 6 epic doorstoppers upon which the TV series is based, I expect a CONCLUSION to the story. Open-ended narratives that continue past the shark-jumping moment are tedious but Game of Thrones is going somewhere. There is an end in sight, an end that will probably arrive on television before the final book is published because Georgie loves tormenting his fans.

JRR Tolkien vs George RR Martin: Epic Rap Battles of History sums up how Tolkien paved the way for Georgie-boy to crusade today, reminding us that Tolkien is number 1 while George is after Shades of Grey. Watch the video, it’s hilarious. The linked video was published 7 days before I scheduled this post and already has well over 6 million views. Watch, learn and laugh.

George RR Martin has, effectively, written an R-rated version of Lord of the Rings based on the One Hundred Years War — so he can get more books out of the source material than Tolkien could out of World War II. 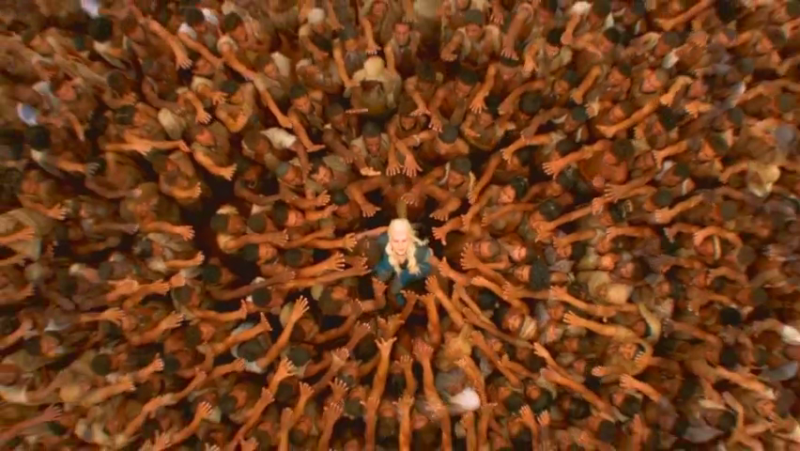