Metalocalypse is a satirical black comedy cartoon produced by Titmouse inc. Created by Brendon Small, Metalocalypse is a show by metal-heads for metal-heads. The show focuses on fictional death metal band ‘Dethklok’, so immensely popular that they are “the world’s greatest cultural force”.

Season 3 picks up where the previous season left off, with the band trying to cope after their manager apparently died. Dethklok is completely unable to control their finances and end up being blackmailed into signing with a different record label, until their band manager comes back from the dead and enables them to play a comeback show.

From then, the season has a variety of episodes which poke fun at metal band’s drug/alcohol addiction and rehab, law suits between band members, family relationships, medical examinations and ‘selling out’. By and large, the dialogue and issues covered throughout the season were punchy and entertaining. The best episodes would be ‘Tributeklok’ and ‘Doublebookedklok’, the former about Dethklok feeling as though they had ‘sold out’, so they formed a tribute band to themselves in an attempt to ‘find their roots’. The latter was a delightfully entertaining episode whereby miscommunication between the band and its manager resulted in Dethklok being scheduled to play in Israel and Syria on the same day, escalating international tension and causing many countries to prepare for WW3 in the event that Dethklok cancelled its show in one of the countries.

There are two albums available as well, consisting of full songs from the show and some original stuff. Some of the guys actually go touring globally as Dethklok. The albums are pretty good too. 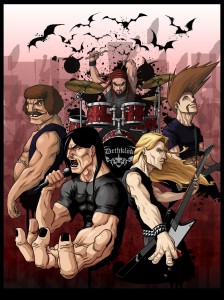 CARTOON NETWORK, the logo, METALOCALYPSE and all related characters and elements are trademarks of and © 2010 Cartoon Network. A TimeWarner Company. All Rights Reserved.