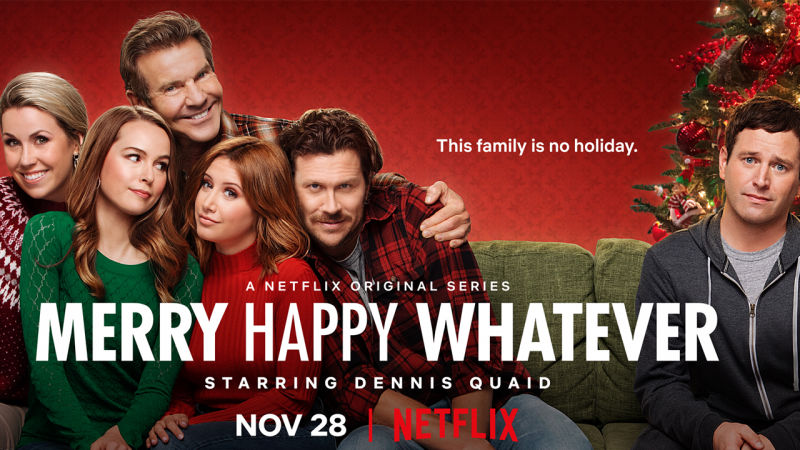 Emmy Quinn (Bridgit Mendler) and her boyfriend Matt (Brent Morin) go to Philadelphia to spend Christmas with Emmy’s family. At the airport, they meet the patriarch of the family, Don Quinn (Dennis Quaid). The meeting goes badly with canned laughter irritating me like nails on a blackboard. Merry Happy Whatever starts like an old-fashioned sitcom with actors mugging for the camera while canned laughter only emphasises comedic mediocrity.

Later we meet Emmy’s sister Kayla (Ashley Tisdale) whose husband dumps her in front of the entire family. It turns out that men may not be her thing. Then there are Patsy (Siobhan Murphy) and Jewish Todd (Adam Rose) who are trying for a baby without previously discussing the role of religion in their lives. Patriarch Don is a staunch Roman Catholic.

And finally there are Emmy’s brother Sean (Hayes McArthur) and his wife Joy (Elizabeth Ho) and their three children. Spouses call themselves the Outlaws and meet for private bitching sessions outside, often while smoking on the QT.

Merry Happy Whatever is over the top but luckily the canned laughter seemed to ease off (or did I just switch off?) after a few episodes. Texting each other is part of the humour without any voice over reading the texts. This is a common problem with TV and movies these days. I gritted my teeth and didn’t bother trying to access the texts. After all, it’s only a B-grade comedy. At the end, I didn’t think I missed any plot points by missing the texts. If you enjoy farcical caricatures of family gatherings to inoculate yourself before Christmas, this is the comedy for you.