A Memory of Light by Robert Jordan and Brandon Sanderson

A Memory of Light was reviewed by Lenise Prater here. 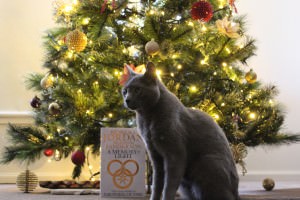 A Memory of Light

What does a benevolent overlord get a loyal, moderately obedient servant for Christmas?

Answer: A Memory of Light, an appropriate gift to sit beneath the Christmas tree.

Ok, I may have had a little help.  People without opposing thumbs may need additional assistance.  Thanks to Laura Hanly of Orbit.

BUT I WANT ALL THE GLORY.

The servant’s children will be delighted.  This servant has a history of purchasing her children’s gifts early and leaving them wrapped where her children could be tormented by the limitless possibilities of enticing mysterious parcels.  This is Karma.  The Wheel is complete, along with Robert Jordan’s signature on the title page and a shiny coloured map in the front.

The only problem with this gift was that this post couldn’t be published until the release date.  That’s right, folks, A Memory of Light, the 14th and final instalment of the Wheel of Time series,

For twenty years, The Wheel of Time has enthralled more than forty million readers in over thirty-two languages. A Memory of Light brings this majestic fantasy creation to its richly satisfying conclusion.

‘And it came to pass in those days, as it had come before and would come again, that the Dark lay heavy on the land and weighed down the hearts of men, and the green things failed, and hope died.’ – From Charal Drianaan te Calamon, The Cycle of the Dragon.

In the Field of Merrilor the rulers of the nations gather to join behind Rand al’Thor, or to stop him from his plan to break the seals on the Dark One’s prison – which may be a sign of his madness, or the last hope of humankind. Egwene, the Amyrlin Seat, leans toward the former.
In Andor, the Trollocs seize Caemlyn.

In the wolf dream, Perrin Aybara battles Slayer.
Approaching Ebou Dar, Mat Cauthon plans to visit his wife Tuon, now Fortuona, Empress of the Seanchan.
All humanity is in peril – and the outcome will be decided in Shayol Ghul itself. The Wheel is turning, and the Age is coming to its end. The Last Battle will determine the fate of the world. . .

Working from notes and partials left by Robert Jordan when he died in 2007, and consulting with Jordan’s widow, who edited all of Jordan’s books, established fantasy writer Brandon Sanderson has recreated the vision Jordan left behind.

Brandon Sanderson said that not only did he work from Jordan’s plans, but

For more information, listen to Brandon’s interview here and read the servant’s report of Brandon’s Wheel of Time panel at Supanova here.