Meg Mundell contributed to the Authors For Fireys fundraiser in January 2020. Emily Gale and Nova Wheetman organised this mammoth undertaking. They raised $513,149 to support firefighters and to help Australia’s bushfire survivors.

Meg Mundell is a writer and academic. Born and raised in New Zealand, she lives in Melbourne with her partner and young son.

Her second novel, The Trespassers (UQP, August 2019) is gaining positive early reviews, including a 5-star review from Books+Publishing, was named Readings ‘Fiction Book of the Month’ for July 2019, and has been optioned for a TV series. The critically acclaimed Black Glass (2011) was Meg’s first novel, and Things I Did for Money (2013) is her debut short story collection.

Meg has been a guest on DMZ so often she should be on staff! Here is a list of all my reviews of her books and all guest appearances.

I am a novice card maker but I made the pictured card. This is a thank you to Meg Mundell for appearing as a guest on Dark Matter Zine AGAIN and for supporting Australia’s firefighters. 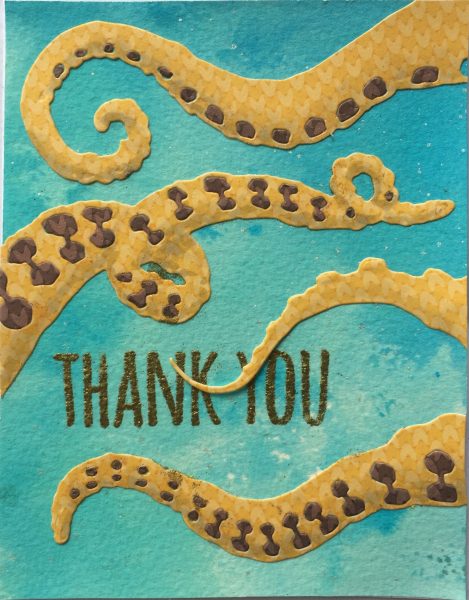 Before this card design

The other theme I had in mind was a jellyfish because meg’s latest book cover has a beautiful red jellyfish. However, I didn’t feel up for trying to paint one freehand. Give me time! That left me with tentacles. I thought about making another octopus card like Cass Moriarty’s. She’s been such a lovely guest and supporter over the years that I didn’t want her to think I’d mass-produced something. So I wanted to make Meg something unique, not something that looked like someone else’s card.

I really wanted to make Meg a pop-up card with tentacles and coffee but I couldn’t figure out how. I still haven’t made my first pop-up card so that’s something I still need to research.

In the end, I thought of this card design. The background is my favorite (so far) blend of distress oxide inks smooshed onto a media mat, soaked in water then picked up with watercolor paper. I cut the tentacles using a die I bought last year and had been itching to use. Again, tentacles, coffee… for some reason I REALLY want to do this design but still can’t figure out how to make it work. I cut the tentacles out in two colors and pieced the suckers into the lighter color. This was hell. I didn’t have my you-beaut new 10cm-distant ultra magnifying reading glasses yet so I got a huge headache. In the end hubby ended up helping a bit too.

The sentiment: after using an anti-static tool I stamped the thank you with versamark invisible ink, sprinkled with gold embossing powder then melted it with my heat tool. Then I glued the final tentacle onto the card, only gluing it close to the edge so it’s lovingly draped around the sentiment.

I did a little shading with copic markers; if I made this again I think I’d go in much more heavily with the copic marker coloring but I didn’t want to mess it up.

Ironically I find a lot of card sentiments – like “Hello Lovely” – to be rather creepy. To me they reek of patronising men or even sexual harassment. Because of the tentacles I very nearly didn’t send this card to Meg, worried that it would be icky. In the end I decided that we’ve known each other long enough that I didn’t think it would be misinterpreted.

Life is a journey. The destination is, well, terminal, so it’s the journey that counts. I’m trying to make the most of the journey here, experimenting, exploring and getting in touch with what I think, what I like, and noticing what I don’t like even though it’s popular. Hence the fact that I’m avoiding sentiments like “Hello Lovely”. That might change sometime in the future, I don’t know.

I read today an article about how stressful lockdown is (It’s 15 April as I write this). This person – Elephant somebody – was explaining how so many of us carry trauma that isolation and “sitting in silence” can aggravate. While this is true in the big sense, it can also be true in the smaller things like watching card-making videos and feeling squicky about some things that are culturally acceptable in the crafting community and/or in other countries.

My thoughts: take it slowly, get in touch with yourself while trying to manage overwhelming feelings. Notice if something makes you feel squicky and if you love something or if you like THIS bit of THIS thing but not THAT bit. Although I’m talking about crafting and watching makers’ tutorials, I’m sure this can be a metaphor for many other things in life.

Stay safe and be kind to yourself,
Nalini