There’s an old story about a jester or a teacher who ran foul of his king. The king sentences the jester/teacher to death. The desperate jester tells the king he has a brand-new trick. If the king gives the jester his best horse for a year (or 5 years), he will teach the horse to talk. When asked whether he really can teach the horse to talk, he says there are many possibilities. He could flee on the horse, he could eat the horse, or maybe the horse will talk.

Stephen Mascrow tells a version of the story to his son at bedtime because he and that jester have a lot in common. He lives in fear of losing a job he absolutely loathes at legal firm Freely Savage Carter Blanche.

Hamilton, Stephen’s boss, told Stephen that he plans to fire him in a few months. Terrified that he will let his family down, his estranged wife who is living in their house with their son, Stephen acts on impulse. He corners Malcolm Torrent, CEO of Torrent Industries, in an elevator. Torrent just spoke to Hamilton, concerned about four accusations of sexual harassment made against executives in his company. Hamilton dismissed Torrent’s concerns, saying he would make it all go away.

So far this story sounds depressingly real. However, Stephen’s gambit lands him 12 months of semi-guaranteed employment to make the accusations of sexual harassment go away.

Here’s where it gets really interesting: Stephen is a man of some ethics as well as a healthy self-interest. Plus his ex-wife Eleanor, with whom he is trying to reunite, expresses her feelings in no uncertain terms about him being employed to silence sexual harassment victims.

Maybe the Horse Will Talk may well be a roman-à-clef for those in the know. However, it appeared to me to be a little less transparent than Upload, the tv series that so clearly featured characters spoofing Rupert Murdoch (who accidentally died a bloody and permanent death) and one of the Koch brothers who paid for an almost-extinct animal to be slaughtered to perfect the taste of his digital menu. However, I couldn’t help wondering if certain characters in Perlman’s book were specific public figures.

And then there was the AMP scandal that has already resulted in shareholders demanding better practices of businesses, directly linking share values to misconduct. Has life imitated art or did Perlman see this movement emerging? Which came first, the chicken or the egg?

It’s difficult to describe Maybe the Horse Will Talk without giving away too much. If you told me that a book dealing with sexual harassment was screamingly funny and incredibly satisfying I would not have believed you. The book was pitched to me as hilarious social satire without much detail, for which I am very grateful. I love this book. It’s Max Barry on the #MeToo movement and working for a law firm.

Post script: OMG OMG OMFG ELLIOT PERLMAN IS A BARRISTER. Wow. This is not unlike Max Barry who so successfully spoofs HP after working there. Read Perlman’s novel if you liked any of Max Barry’s satires including Machine Man. 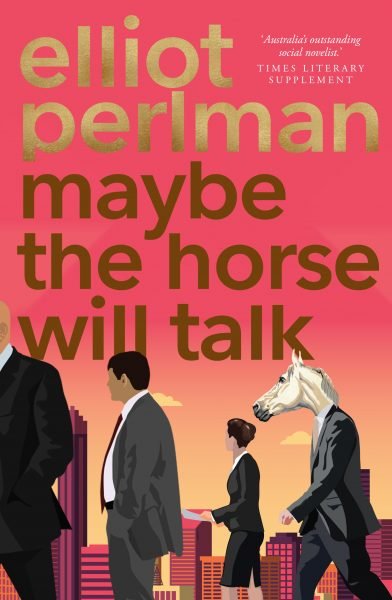