Master Keaton is an archeology professor without tenure teaching in a college. His wife is estranged but he has a reasonable relationship with his teenage daughter. Career progression is hampered by taking leave to investigate insurance fraud like a bounty hunter.

Volume 1 is slow to start but becomes more interesting and engaging late in the book when he treasure hunts in the desert and around a ruined island with bad guys out to kill him. The minion only got about 1/3 of the way through so his impression is less favorable than mine.

Some of the detail is interesting. According to comic book aficionados, comic books can be highly educational and engaging; the Drops of God was repeatedly cited as a great read that taught a lot about wine in such an interesting way that even non-wine drinkers enjoyed it. However, Master Keaton was somewhat less enthusiastically received by the group, with parallels drawn between Tintin and Master Keaton. Those who loved Tintin loved Master Keaton. Those who gave up on Tintin at a young age through boredom (like the minion, me and others at the comic book club) found Master Keaton less engaging.

After Jason Franks’s comics masterclass I was a bit confused when reading Master Keaton. Jason said that frames with bleed (reaching the edge of the page) should be read first on the page or last on the page. Master Keaton, being Japanese, reads from back to front, right to left. However, many of the bleed frames seemed to want the reader to start left then go right or to finish left to right. I couldn’t tell whether these bleed frames were the result of long-running issues regarding language conversion or just decorative with no purpose. In the end I just read right to left, top to bottom and it made sense.

Master Keaton is a cross between Tintin and Indiana Jones but with more Tintin and less excitement and humor than Indy. Volume 1 picks up towards the end but it’s a bit of a slog to get there. Our resident expert, Helen from Impact Comics, seems to have followed the series for several volumes. It sounds like later volumes have much more story content but you’ve got to get there first.

I want to read Drops of God. 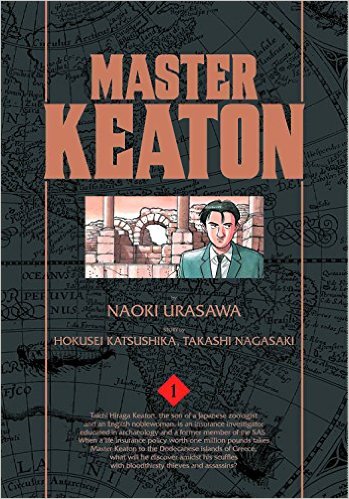