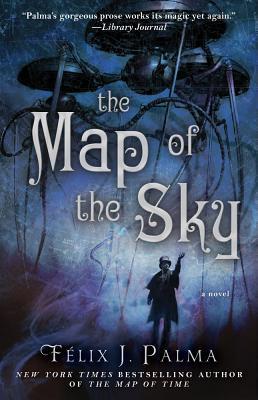 a review by Elizabeth Manthos

The Map of the Sky, the sequel to Felix J Palma’s bestselling novel, The Map of Time, followed once again author H. G. Wells’, this time his journey after the release of his novel The War of the Worlds. The novel, set after the release of Wells’ second novel, follows three interconnected plots that create a tale of mystery, time travel and the extraterrestrial. Cameo appearances are made by a young Edgar Allen Poe (whose slow decent into madness we witness) and Captain Shackleton and Charles Winslow from Palma’s first novel The Map of Time.

The main backdrop for this novel is the love story of New York socialite Emma Harlow and millionaire fiancé Montgomery Gilmore. The catch, she’ll only marry him if he can replicate the alien invasion featured in Wells’ novel. The question is, can Gilmore do it, or will there really be an alien invasion in London?

After reading The Map of Time, I wondered how Palma could create a sequel to a well written and descriptive book. He’s managed to do it with The Map of the Sky. This descriptive cross-genre novel takes us around the world and back with the best of science fiction, horror and historical fiction all rolled into one. With parts of the novel baring similar resemblances to John Carpenter’s The Thing, it allows the reader to be thrust into a sci-fi horror all while maintaining the underlying love story of Emma and Montgomery.

Although overly descriptive in parts, the writing style and story allows the novel to stand alone as well as work as a sequel. In all honesty, it took me a while to get into it, but once I did, it was a good read. My only real problem with the novel was the narrator not knowing where the story was starting and jumping from one part of the story to another so we might understand the part we had already read. The novel is not as great as the first, but I recommend to anyone who likes sci-fi and historical fiction.