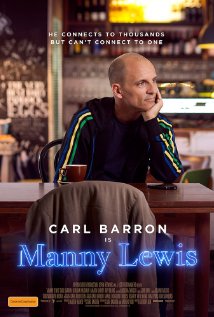 At a barbeque women all admire Manny, all projecting their own issues or desires onto him. One thinks he’s a funny man. Another says she’s manic depressive and asks if he has bipolar disorder. Manny can’t connect with any of these women.

On his way home from a night out with a mate, Manny pauses to pat a dog abandoned by its owner in an alley. Prior, the movie is a little slow out of the gate but from this point it gains momentum.

Lonely, Manny phones a fantasy sex hotline to talk to a woman, ‘Caroline’. And calls her back. Again and again. He must have spent a fortune!

‘Caroline’ figures out who Manny is when she sees him on TV.

Manny sees Maria (aka Caroline) in a café reading. Instead of telling him it’s not sexy to interrupt her when she’s reading [pointed look], she gives him her phone number AFTER HE’S SPOILED THE PLOT OF HER NOVEL.

Manny keeps phoning Caroline to talk about his relationship with Maria, inverting the Cyrano de Bergerac tale by telling Caroline everything that bugs him about Maria who then changes to meet Manny’s ideals. However, eventually Manny catches her out.

The setting — Sydney with views of the harbor — is spectacular. The cast are iconic Australian actors, including (I think) the actor playing the American agent with the terrible accent spoofing Americans doing Australian accents.

Manny Lewis is a romance aimed mostly at men; Manny is the central character dealing with life, fear of commitment and father issues. The comedy on stage tends towards the dark side but in Manny’s life can be a little lighter. In my opinion, the story arc with the dog needs one more scene but Manny’s journey is engaging and complete.

There. I managed to review an Australian comedy without using the word ‘quirky’ or any similar clichés. It’s always a challenge.