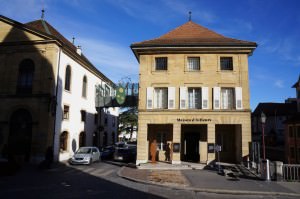 Maison d’Ailleurs is a dedicated science fiction museum in Yverdon-les-Bains, Switzerland. The full name in English is The House of Elsewhere: Museum of Science Fiction, Utopias, and Extraordinary Journeys and the museum houses the extensive SF collection of founder, Pierre Versins. 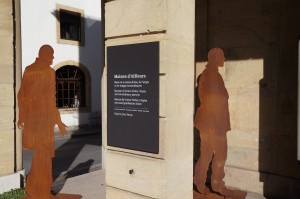 The permanent exhibition begins on the ground floor with a brief history of SF, including cover images from iconic comics and books from the 19th and 20th centuries. The second floor contains the Memories from the Future Space, which focuses on the four dominant SF media forms (comics, literature, film and music). There are classic movie posters, early edition comics and various stations where you can listen to famous SF soundtracks.

The temporary collection while we were there was called Stalker, showcasing both Andrei Tarkovsky’s film production and the book it was loosely based on (Roadside Picnic by Boris and Arkady Strugatsky). The exhibition space was made to look like “The Zone” and there was even a small beanbag cinema up in the rafters where the film was playing on a loop. 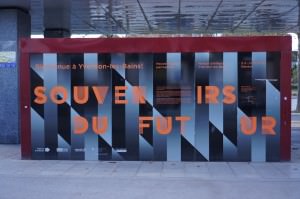 The rest of the permanent collection is known as the Jules Verne Space and is accessible via a second storey glass walkway that connects two buildings separated by a road. This space houses an extensive library of comics and SF books, in addition to artistic models of the fantastic machines described in Verne’s novels. There are also audio-visual displays and radio listening stations. The museum also contains a gift shop that sells exhibition guides, SF books and souvenirs. 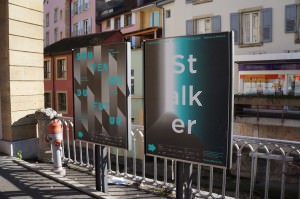 While rather small, the Maison d’Ailleurs is definitely worth seeing and ticket prices are quite reasonable. Most of the exhibition is in both French and English. Recommended for anyone with an interest in the history of SF, and particularly for Jules Verne fans.