The minion and I are looking for some genuine 2 player games; so many of what we’ve tried say 2 or more players but really suck for only 2. Many years ago the minion played Magic the Gathering with friends and had a blast. At that time we were too skint to buy our own cards so he had to wait… many, many years… for us to revisit Magic.

Magic the Gathering had a large booth at PAX Australia 2014. On day 1 I spoke to Magic staff who told me they had tables where complete newcomers were being taught to play, so on day 2 I brought a hand-held electronic magnifier to have a bash with the minion. Or to bash the minion. Not sure.

The minion tends to be focused so I nearly had to drag him there, repeatedly telling him that there was one thing I wanted to do that wasn’t entirely for Dark Matter this weekend was to play Magic the Gathering with an instructor. You’d think he hadn’t raved about his first Magic experience. Maybe it was so long ago that he’d forgotten how much fun it was. Maybe he’s just too focused on being a serious minion. Either way, perseverance paid off.

After some interviews and the Tripod panel — actually the music panel but we went because TRIPOD — and after lunch, I dragged the minion over to the Magic the Gathering stand.

[cough] Well, he may have led the way because he could read the map and the exhibition hall floor is ENORMOUS.

People were standing around in a cluster so we kind of joined what looked like a queue only to realise it was 2 separate queues going in opposite directions. We then slipped in the middle, which was really the end of the queue we wanted. Staff gave us a flyer and explained if we got three activities punched as completed, they would give us a shiny Magic pin.

The minion wasn’t interested. I took 2 flyers and said WE WOULD DO THEES. 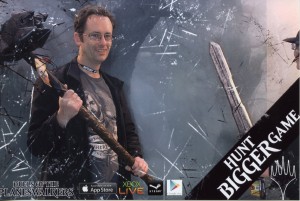 First up, we had our photos taken. They had LARP (Live Action Role Play) weapons for us to pose with. I took a sword; you can see that to the right of the photo. You can just see me at the edge of the frame. The minion is front-and-nearly-centre in the photo, looking good with a mace. After a few minutes our photo slid out of the vending machine slot, all printed on photo paper. Our flyers were hole-punched and we moved on.

Next up: to learn to play. The queue wasn’t too long so very soon we sat down together with an instructor.

The instructor — who I’ll call ‘M’ — had me sit next to him because using a hand-held magnifier to read the cards was going to make teaching me tricky, especially as the magnifier could only show a small portion of a card at a time.

M asked what color decks we wanted. He refused to tell us what the colors meant until after we’d chosen our colors.

The minion took black and didn’t learn that black stood for death and decay until after he’d opened the box. He grimaced with distaste. Although he prefers wearing black, as indicated by most of his geek shirts having black backgrounds, on an alignment chart the minion would usually be lawful good with occasional forays into neutral. I suspect the minion would have chosen white for justice and nobility if he’d known.

I took red which is also evil. On an alignment chart, depending on my mood I’d range from lawful good to chaotic neutral. Had I known what the colours were, I think I would have gone for green: green like Druids and Mother-Earth-types.

M took my deck of cards and shuffled through them, extracting several cards to explain game play. I think he returned them to the deck but he told me not to shuffle the cards, which seemed kind of strange.

We played an open game, with all our cards on the table where M could see both the minion’s cards and mine. M explained the concept of hit points, damage points and mana. He assumed these would be new concepts to us.

We started to play half a game: that is, instead of the usual 20 HP (hit points or life points) with which players normally start, we had only 10 points because we only had half the usual number of cards in the deck. Plus they needed to keep the lines moving.

Along the way we learnt the basic rhythm of playing the game and saw that it’s a good game for 2 players.

We started to pack up.

M took my remaining draw cards and flipped the stack over so the pictures were upright. When I reached for them he covered them with his hand, preventing me from picking them up, then he moved them to his right out of my reach.

I assumed that particular stack must have been M’s cards although my box seemed really empty.

After we left the Magic instruction area, the minion went to get a show bag because the stall hadn’t been open when we came in. He didn’t want to play the iPad game to get the shiny Magic pin but I did, so I queued for the game. While I waited, another staff member came rushing out to tell me I’d left my flyer behind. I showed him the two flyers I was holding for the minion and myself, saying ‘I have 2, I’m good.’

He took one of my flyers and replaced it with a flyer that hadn’t been stamped for the photo. WTF?

When the minion returned, he got the replacement flyer stamped for the photo. But then he dragged me off to an awesome panel on sociology and computer games so I didn’t get to play. I could see the cards on the nearest iPad and they looked life-sized, too small for me to read, so I could have been struggling with the hand-held magnifier again. I’ll look into it later to see if it’s possible to magnify the cards; Apple products are usually good for accessibility functions. If I could play Magic on an iPad or the like, I could be inspired to purchase one. Just for train journeys, y’know? [shifty eyes]

Once home, the minion and I counted our cards to discover the minion had 30 cards in his starter deck and I only had 14 left. The minion’s starter deck and both the decks from our show bags had special cards marked with foil dots; my starter deck from the instruction game had none. I have no idea what the 16 cards were that M kept, but I’m fairly sure he kept them because they were desirable cards. I was left with 14 cards a foul taste in my mouth.

At least we purchased a core deck each so we had enough cards to start playing at home.

My very first Magic the Gathering experience left me asking: Magic people, are you trying to tell me something?