a guest blog by Madeline Ashby

I guess I’m pretty concerned about the whole SFWA mess. In case you missed it, Mike Resnick and Barry N. Malzberg took to the pages of the Science Fiction Writers of America Bulletin, and talked about how oppressed they were for having to keep art off the covers of the magazine that would be better suited to the side of a van in 1972. The phrase “lady writers” was used. And then they compared basic human courtesy (i.e. not objectifying those same “lady writers,” and not posting cover content that objectifies women) to living under a Stalinist dictatorship. Then they played the “political correctness,” card, which is like the centre square of Douchebag Bingo.

Basically, this fires me up because I’m one of those lady writers, and I’ve had enough of these clowns. I think these guys are basically like those spoiled kids you see have total meltdowns in the grocery store because their mom won’t get them Lucky Charms. Like they’re doing just fine one minute, and then the next minute they’re red in the face and screaming and lying on the floor kicking and flailing their arms. And when you try to talk to them about it, when you speak calmly and try to say that they’ve gotten lots of other things that they want (like peanut butter-and-jelly sandwiches with the crusts cut off, or Easy Mac, or a SFWA membership), all you hear is “THEY’RE ALWAYS AFTER MY LUCKY CHARMS!!!” And by “LUCKY CHARMS!!!” they mean “trappings of privilege.”

Look, guys. Nobody’s saying you can’t jerk off to Red Sonja. She’s hot. Plenty of people, men and women, jerk off to her. So go right ahead. (Watch out, though. That’s how you get a repetitive strain injury. Maybe keep some Voltaren handy. Just don’t mix it up with the lotion. Make sure the fonts on those bottles are nice and big and legible.) Just don’t share your jerk-off material with us. Or, share it within a smaller circle of friends. You know that’s what the Internet is for, right? It’s for porn. It’s there so that we never have to see how many accounts you’ve got at your spank-bank. There are whole image boards designated for this very purpose. Please, take it to 4chan, like everybody else.

Think about it this way. Say the Lucky Charms kid is a little older, and his mom catches him with a bunch of copies of Playboy around the house. (I’m sticking with paper mags, here, because for some absolutely incomprehensible reason the SFWA Bulletin is still a paper magazine. Maybe so fewer people will read it, I don’t know.) And his mom is really sweet, and says: “Hey, Junior, could you try to keep your Playboys under your bed? That’s what your father did, before he met me.” And the Lucky Charms boy just gets all irate and says: “I REFUSE TO LIVE IN YOUR STALINIST DICTATORSHIP, MOM!!! HOW COME YOU’RE ALWAYS NAGGING ME?! ALSO, CAN I HAVE SOME MONEY?”

That’s what those guys sound like. And it’s frustrating, because they represent the viewpoints of a number of people who attend the same conventions as I do, and the same conventions that a bunch of other young up-and-coming “lady writers” attend. It’s frustrating, and creepy, and demoralizing, to think that while we’re just there to work, they’re projecting decades of bullshit gender politics on us. But it’s true, and I know it’s true, based on how I and some of my fellow “lady writers” have been treated in the past. This is one of those “tip of the iceberg,” things. When Resnick and Malzberg and the editor who, for some inane reason approved their work, all inevitably wind up dismissed from their posts, those attitudes they espoused will remain.

Unless, of course, Resnick and Malzberg’s piece was just a cynical attempt at gaining the sympathies of the Angry Old White Conservative Male market. You know, those guys who are pissed that more SF isn’t just like the stuff Heinlein used to write. The ones who are sad that they lost out on jetpacks, but still can’t figure out how the hell to work the GPS on their dashboards. More and more, I wonder if that’s not what happened. You know, you say “Stalinist” in your column like it’s some sort of shibboleth for the so-called Greatest Generation, and boom! Instant sales, from guys who just want to “support your voice,” and “not let the bitches get you down.”

I’d like to think that that’s what happened. That this was just this weird false flag operation to maintain some waning sense of relevance, and that Resnick and Malzberg are really nice guys and not spoiled kids horrified at the idea that other people — fifty percent of the population, in fact — have different priorities than they do. I’d like to think that the majority of SF fandom is smarter and kinder and more emotionally and intellectually flexible than they seem to be. I’ve met some assholes at conventions, but I’ve met a lot more genuine, sweet people who weren’t hitting on me or talking down to me, either. I had thought they were the majority. I hope that assumption was correct.

Madeline Ashby is the author of 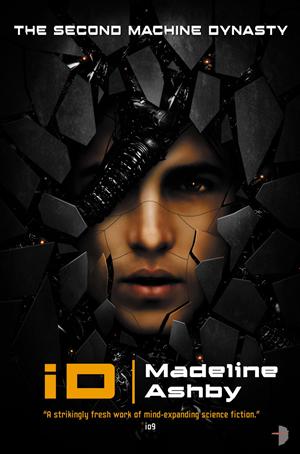 Javier is a self-replicating humanoid on a journey of redemption.

Javier’s quest takes him from Amy’s island, where his actions have devastating consequences for his friend, toward Mecha where he will find either salvation… or death.

File Under: Science Fiction [ vN2 | Island in the Streams | Failsafe No More | The Stepford Solution ]

vN Praise: “Ashby’s debut is a fantastic adventure story that carries a sly philosophical payload about power and privilege, gender and race. It is often profound, and it is never boring.”
Cory Doctorow, BoingBoing on vN