Madeleine Roux zombie author  talks to Daniel Haynes; this interview took place via email so is only available in text format. 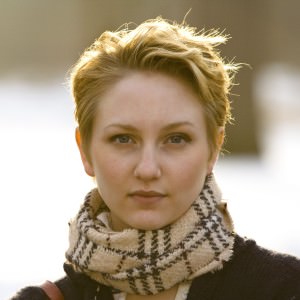 Hi Madeleine. Thanks for agreeing to this interview.

It’s my pleasure. Thanks for having me.

Please tell me about yourself.

I’m fresh out of college, a writer based in Wisconsin, though I grew up in Minnesota and then relocated here for university. I work part-time at a bookstore, which probably isn’t much of a surprise!

I’m definitely a video game junky, but I also love to read, cook and travel.

Is there a particular person in your life who encouraged you to write?

I grew up in a creative family. My dad is an artist and works in advertising. My mom is sort of the superhero of mothers – she made matching clothes for me and my dolls, sat through all of my one-woman shows, put themed notes in my lunch box every day in grade school and chauffeured me to drama club, speech team… It was a nurturing environment. My brothers and I were always encouraged to embrace our creativity and imagination.

What authors have influenced you the most?

It’s a cliché to say this, but I love Jane Austen. Neil Gaiman is another influence – he comes up with the most magical, believable worlds. Reading classics like Thackeray, Faulkner, Steinbeck and Fitzgerald always inspires me to try harder and reminds me how far I have to go still.

Does Youtube have videos other than people filming their cats doing idiotic things? If so, I’m not aware of what those other videos might be. But when I’m not watching cats slide into empty boxes, I like reading snarky blogs. Pajiba is one, they do brilliant reviews of books, movies and television. I love to cook, so I’m addicted to Top Chef and Masterchef. I’m also a videogame fanatic. It’s a dream of mine to someday head up the writing team on a videogame.

Where did the idea for Allison Hewitt start? How did it come to fruition?

I work at a bookstore and it’s wonderful, but sometimes you can’t help but daydream. So naturally, a person in perfect mental health, like myself, starts to consider how we would survive a zombie outbreak at the store. That was the bud of the idea, it flowered when I started to consider using the blog format to tell the story. Then it really fell together, once I realized how perfect the medium is to tell a survival journey.

Why did you choose to work with/on wordpress?

It’s simple. I know a bit of html but not enough to be really competent. They make it easy for simpletons like me to update and change the look of the blog. That’s not a plug, they don’t pay me, I just like how intuitive their system is. They also make it possible for more computer-savvy sorts to take control if they know how to fuss with the innards.

You included comments from the wordpress blog itself, are you satisfied with them as inclusions to the story?

Absolutely! I didn’t use all of them, but I picked the ones that added the most to the world and the story. It was tricky to choose them and then expand them in the book because one, I wanted to honor what those real people had contributed, and two, I hadn’t seen it done before so there was no precedent.

When you went to write the blog, did you plan it out beforehand or did you just ‘go with it’?

A bit of both. Any writer that says they’re “just going with it” is probably lying. Good stories need an element of planning. There was spontaneity, certainly, and some of the ideas that came up surprised me, but I planned out the first few chapters pretty clearly. After that, I wasn’t working from a strict outline, but I had a general idea of where the story would go. There are always changes in editing, so I was able to refine anything that didn’t work when I initially put it up on the blog.

What is your primary target audience for Allison Hewitt?

Everyone? Maybe not the undead. They might be offended, although they also can’t read. But honestly, I’ve had all sorts of people enjoy the book. Generally, I wrote it for a crowd of readers that want action and adventure but also want a bit of brain stimulation. I’m not a fan of pure escapism, so the book is for people who want something light but don’t want to leave their brains behind.

What would you describe as the biggest influence for the story Allison Hewitt? What about Allison’s character?

Probably my job, because it gave me a great setting and foundation for the outbreak and the ensuing mayhem. The story itself was influenced by Allison’s character, because I wanted her choices to be logical in an illogical, scary world. Once the motivation to find her mother pops up, she has the drive to do whatever it takes to survive and a destination in mind. Allison’s character comes from a lot of people, friends and heroines from stories I admire and there are elements of me in her, too. One of my big goals was to have a romantic subplot that didn’t turn her into a flailing mess. I mean, she’s awkward with Collin at first but she doesn’t drop everything to follow him, her mother is still the priority. That doesn’t sound groundbreaking, but it’s kind of shocking how in many, many novels and movies the female protagonist suddenly tosses everything out the window to follow around a man. Men are great and everything, but her mother is much more important.

Are the characters based on anyone from your life?

Some of my co-workers are there, but they’re exaggerated and changed around. Luckily, they didn’t fire me or tease me too hard. They’ve been great sports about the whole thing. There are aspects of friends and family sprinkled throughout, but nobody is wholly taken from my real life.

How much was the story/events contained within Allison Hewitt affected by outside sources? Friends? Family? The Internet?

Quite a lot, actually, especially because I took into account what the commenters were saying as I wrote the blog. If they advised Allison not to do something, I always took that into consideration. I wanted the blog to function, not just as the vehicle but as a guide for me, too. There were times I put an intentionally shady character into the mix to see if the readers would catch on and say something. Sometimes they did and sometimes they didn’t.

What are your favourite Apocalypse (Zombie or otherwise) stories, books, films or shows?

Shaun of the Dead ranks very, very high. The book World War Z is also a great take on the zombie outbreak, and works brilliantly as an audiobook, too. The Walking Dead is pretty much required reading for any zombie enthusiast. Some videogame lovers will probably have played Undead Nightmare (from Red Dead Redemption) and experienced the terror of the zombie bears, which make my zombie squirrel look like a sweet little fellow.

Where do you see Zombie fiction ‘going next’?

I don’t think it will slow down, if only because it’s so versatile. Zombies can represent anything you want them to, and they can be the primary threat or the background. I’ll keep loving the genre as long as we keep seeing character-driven stories and films. Those never get old.

What are you currently working on?

I’ve got the finishing edits for the sequel, Sadie Walker Is Stranded, and some new projects that are in early stages. I’d like to dabble in several genres, so where I go next might surprise you.

What does the future hold for you in addition to your writing?

I’m moving to a new city soon, which is always exciting. It’s hard to imagine what would be coming down the line that doesn’t involve writing in some capacity! I’d love to branch out into videogames, in terms of design as well as writing, and going back to school for a graduate program might be in the cards too, but it’s all up in the air, which is the way I like it.