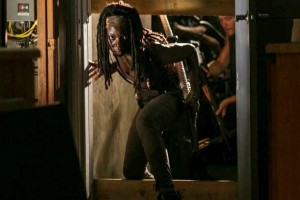 Carl (Riggs) hears the group hollering from the prison catacombs and brings them to the area in which Michonne had been locked earlier. Hershel (Wilson) treats their wounds and tells them that they may not be welcome there for long once Rick (Lincoln) returns.

The Governor (Morrissey) plans to take over the prison, but promises Merle (Rooker) that no harm will come to Daryl (Reedus). Merle is ordered to take Glenn (Yeun) and Maggie (Cohan) to the ‘screamer pits’, presumably to be murdered now that they are no longer useful.

Rick et al move around the town, trying to find where Maggie and Glenn are being kept.  Maggie and Glenn try to orchestrate their own escape, but appear to be failing until Rick and his group rescue them. Daryl is told that his brother held them captive under the orders of the Governor.

Michonne (Gurira) separates from the group and sits in the Governor’s house, waiting for him to return so that she may kill him. Instead she finds the secret room in which the Governor keeps his (zombie) daughter. Michonne goes to kill Penny, but the Governor stops her and pleads for his daughter’s ‘life’. Michonne kills Penny anyway. A fight ensues during which Michonne impales the Governor’s eye with a shard of glass. Andrea (Holden) intervenes and draws a gun on Michonne, protecting the Governor.

Once Michonne has left, Andrea questions the Governor on his hidden room of zombies and decapitated heads. He has an excuse for all and Andrea is satisfied with his answers.

During the street fight that erupts between Rick’s group and the Governor’s militia, Oscar (Ward) is killed and Daryl is separated.

The episode ends with the Governor corralling Daryl and Merle into the fighting arena. He announces to the crowd that Merle has betrayed them due to his earlier lie about having killed Michonne, and that Daryl is one of the intruders. The crowd demands they die.

Season three is doing a fantastic job of hauling The Walking Dead out of the pit into which season two ground the show. There are emotions flying; new characters introduced; characters being killed just as you think they’re safe; and, of course, the zombies. Always lurking.

‘You wanted your brother. Now you got him.’