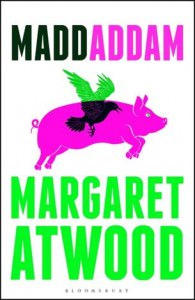 From one of the world’s most brilliant and exciting writers, the Booker Prize-Winning

(Bloomsbury, 30 August 2013, $35, hardcover) the hugely-anticipated final novel in her dystopian trilogy which began with Oryx and Crake and The Year of the Flood.

A man-made plague has swept the earth, but a small group survives, along with the green-eyed Crakers – a gentle species bio-engineered to replace humans. Toby, onetime member of the Gods Gardeners and expert in mushrooms and bees, is still in love with street-smart Zeb, who has an interesting past. The Crakers’ reluctant prophet, Snowman-the-Jimmy, is hallucinating; Amanda is in shock from a Painballer attack; and Ivory Bill yearns for the provocative Swift Fox, who is flirting with Zeb. Meanwhile, giant Pigoons and malevolent Painballers threaten to attack.

Told with wit, dizzying imagination, and dark humour, Booker Prize-winning Margaret Atwood’s unpredictable, chilling and hilarious MaddAddam takes us further into a challenging dystopian world and holds up a skewed mirror to our own possible future.

Margaret Atwood is the author of more than thirty books of fiction, poetry and critical essays. In addition to the classic The Handmaid’s Tale, her novels include Cat’s Eye, Alias Grace, The Blind Assassin, winner of the 2000 Booker Prize, Oryx and Crake and most recently, The Year of the Flood.  Margaret Atwood has been shortlisted for the Booker Prize five times, winning once. She is a winner of the Arthur C. Clarke Award and the Prince of Asturias Award for Literature, has been a finalist for the Governor General’s Award seven times, winning twice, and in 2012 was awarded the title of Companion of Literature by The Royal Society of Literature. Margaret Atwood lives in Toronto, Canada.@MargaretAtwood

“One of the most important writers in English today.”

“Margaret Atwood is the quiet Mata Hari, the mysterious, violent figure… who pits herself against the ordered, too clean world like an arsonist.”

“It’s easy to appreciate the grand array of Margaret Atwood’s works… in all their power and grace and variety. When I think of it, and put it together with her writerly gifts and achievements, it takes my breath away.”

“Atwood is a poet. Scarcely a sentence of her quick, dry yet avid prose fails to do useful work.”