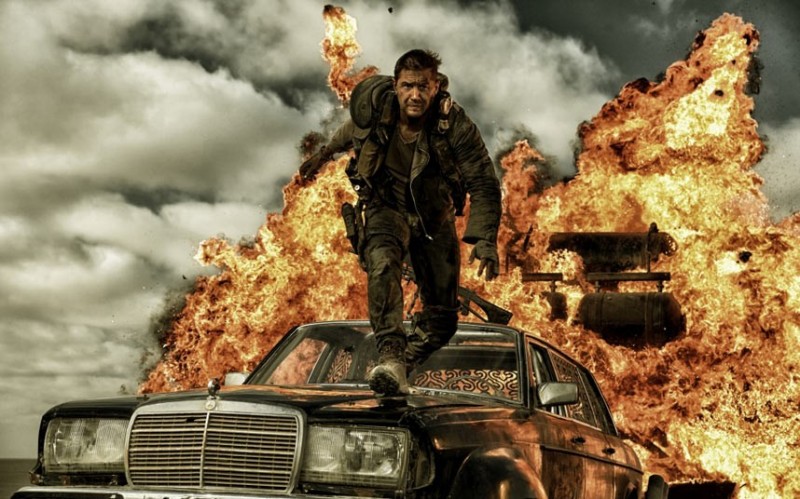 In a post-apocalyptic Australia, one man controls the water to control the people. One of his most trusted soldiers, Imperator Furiosa (Theron), goes rogue and frees the Immortan’s (Keays-Byrne) wives or ‘breeders’. She frees them in the hopes of taking them to her lush homeland.

The Immortan is reluctant to let his brides go so easily and begins pursuit. During this pursuit the women team up with Max (Hardy) who had been held as a blood bag for the Immortan soldiers. It is up to Furiosa and Max to work together, not just for the sake of the wives, but for the sake of humanity.

Mad Max: Fury Road is a great action movie. It could be one of the most enjoyable action movies of the past 10 years.

I haven’t seen any of the previous Mad Max films and Fury Road is fine with that. Enough information is given to provide a fully formed film. By not rehashing and going too far into the back story, Mad Max: Fury Road is non-stop action from the moment the two-headed lizard scampers out until the [spoiler self-redacted].

In terms of plot, there isn’t a lot going on. That’s fine. You don’t need a super complex plot to create a solid, entertaining film with good messages.

Charlize Theron is one of the world’s most beautiful women. She also happens to be one of the world’s most badass women. The five wives Furiosa is rescuing are all strong in their own way. Compassionate, clever, skilled, calm, loving. Furiosa embodies all of these traits and more to become one of the best female leads in an action movie. Theron’s performance is incredible to watch. Do yourself a favour and see Mad Max: Fury Road for that, if for no other reason.

I have seen Tom Hardy in exactly four movies and in each one he portrays what he should perfectly. Mad Max: Fury Road is no different. Another great performance in a film that could have been a major cheddar fest.

And, well, yes. Mad Max: Fury Road is pretty cheesy. It has people driving through the desert, in double-decker cars that fire flames, chasing a giant war-rig that has spikes and very durable tyres. In addition to this — the group chasing Max and Furiosa? They brought their own band. These guys drive through the desert in pursuit with a guitarist and several drummers tied to a truck with HUGE amps. I actually laughed aloud when I realised what was happening. But it is GOOD! Far too many modern action movies take themselves too seriously.

Mad Max: Fury Road is a fun action movie with a few twists and an enjoyable plot. There are plenty of explosions, ridiculous stunts and fight scenes. Definitely worth rushing out to see. Okay, I’m done. Go book your tickets. What are you waiting for? Shoo.

‘My name is Max. My world is reduced to a single instinct: Survive. As the world fell it was hard to know who was more crazy. Me … or everyone else.’

[I suspect CJ may be implying Mad Max: Fury Road is unique. — Editor]