I don’t, as a general rule, post press releases. But the Mad Heidi guys are funny even when they’re outraged about an abuse of human rights. Plus NSFW trailer with terrifying cheese. For context, read this post about the police sacking the scriptwriter. – Editor

HEIDI VS THE STATE: Screenwriter gets justice! A groundbreaking verdict of the administrative court against the police!

MAD HEIDI co-scriptwriter gets justice from the court.

Evil forces got in our way in the spring of 2019 when one of the screenwriters of the Swissploitation film project MAD HEIDI received a dismissal without notice from the Cantonal Police of Zurich. It was only thanks to a mighty army of Heidi supporters that enough donations were collected to support our co-writer in his legal battle.

In March 2019, the 35-year-old man who worked for the Zurich Airport Police was fired without notice after 13 years of commendable service, because in his leisure time, he worked as a co-scriptwriter on the “Swissploitation” film project MAD HEIDI – an action-adventure horror-comedy. This was reported in the media (e.g. thelocal.ch).

What seemed scandalous at the time has now been confirmed by the Administrative Court of the Canton of Zurich in a groundbreaking ruling that is devastating for the cantonal police authorities.

The dismissal was declared invalid. Sweet words in our ears! In fact, the whole verdict is a fine example of grandiose legal lingo. If you understand German, do not miss out on reading the full verdict here.

This judgment is not yet legally binding and in theory, the canton could now take the matter to the Federal Supreme Court. Whatever the outcome of the case, this ruling by the Administrative Court is groundbreaking and historic in terms of artistic freedom!

However, without the financial support of over 130 MAD HEIDI fans who helped to cover the legal costs of over 10,000 Swiss Francs through crowdfunding, justice would never have been served. In fact, after his dismissal without notice, our man initially did not even receive unemployment insurance for three months. This means that only those who have the appropriate financial means can get justice.

All the more we would like to thank all the courageous supporters. The verdict is a victory for artistic freedom and a victory for justice!

MAD HEIDI is a project by Swiss director Johannes Hartmann, produced by Tero Kaukomaa (Iron Sky) and Valentin Greutert (Paradise War – The Story of Bruno Manser). The film establishes the genre of “Swissploitation” films by exploiting and exaggerating Swiss clichés in the best tradition of classic exploitation films. In MAD HEIDI, the famous “Heidi” character – now grown-up – has to liberate Switzerland from a cheese dictatorship.

The makers will soon present a completely new kind of crowd investment to finance the rest of the film. Shooting is expected to start next year.

Copyright © 2020 Swissploitation Films GmbH, All rights reserved.
We added you to our press contact list for upcoming press releases related to MAD HEIDI. 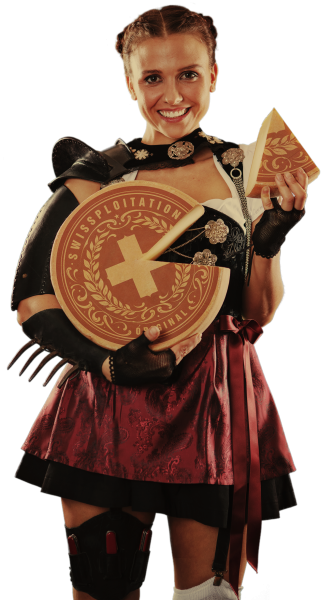