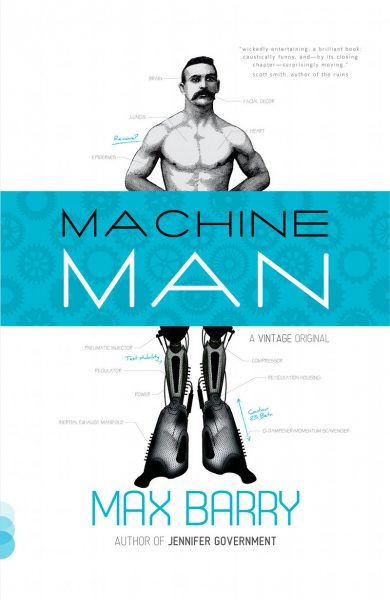 Machine Man opens with Charles searching for his mobile phone because he won’t get dressed without checking the weather forecast.

Charles Neumann is a very intelligent, focused individual, focused well beyond the point of obsession. Neumann has researched what people find appealing in a partner and has followed through on that research to the letter, including occasionally taking a stray cat to a shelter. He cannot understand why people find him repellent.

It takes too long to boot up his laptop apparently, so Charles walks around naked in his lounge room until someone looks in the window. Later he goes to the carpark to search his car, wearing only a towel after having half a shower. This opening segment is humorous while laying the foundation for the plot.

Neumann works at Better Futures, a research and development company located anywhere in any developed Western country, although change a few details to locate the novel in any country with aspirations to high level technology. Neumann has 3 research assistants who vaguely irritate him; he’d like to work on his own.

A work-related accident causes Neumann to lose a leg from above the knee. The primitive level of technology available for amputees disgusts him. He compares this to the ground-breaking technology available for simulating driving a tank for a console game. However, it is not the morality of the situation that annoys him; it is frustration purely motivated from the lack of prior research when he begins developing his prototypes.

Better Futures management gets wind of Neumann’s technological developments, responding by providing him with a substantial department of staff leading to more breakthroughs. Obsession with science proliferates unhindered within the company’s geek culture while obsession with profiteering manifests in the suits. The results are blackly humorous while fairly believable. I think Max Barry could be an Australian version of Joss Whedon, with broad appeal but a blacker sense of humour.

Machine Man uses intelligent science fiction as a vehicle for exploring the human condition. Highly recommended for science fiction fans who enjoy the science and the fiction, and for those who enjoy explorations of human nature. This is one of those rare stories that can be read as superficially or explored with as much depth as the reader desires. For fans of action/comedy, there’s a movie coming based on the book. I hope. Personally, I’d like del Toro to make it.

Previously published in Dark Matter issue 5, September 2011.  This blog was pre-dated to reflect the date of original publication.