Over the long weekend, the minion and I watched the entire first season of Luke Cage.

For those who came in late: Luke Cage (Mike Colter) was Jessica Jones’s sex toy (in a different TV series) then he left to live in Harlem, hiding out from the bad people. The problem is, the bad people don’t just live in Hell’s Kitchen with our girl and Daredevil: the bad people are in Harlem too.

Luke works in Pop’s Barber Shop, a location known as ‘Switzerland’ because everyone is safe there. Pop is a local icon, a former thug who did his time and now tries to set an example to the next generation while giving them choices and keeping them safe.

Pop hassles Luke to get off his fine black ass and do something to help.

Luke wants to fly under the radar because he escaped from jail and doesn’t want to go back. But he owes Pop and Pop calls in the favor.

Meanwhile, Councilwoman Mariah Dillard (Alfre Woodard) — they call her ‘Councilwoman’ not ‘Councilor’ — Councilwoman Mariah Dillard is fighting to keep Harlem black, resisting Trump-style aggressive ‘urban renewal’ projects, also known as ‘bleaching’ the neighborhood. (‘Urban renewal’ is where the original residents are forced out to make way for wealthy people. ‘Bleaching’ is where the original residents are colored and their wealthy replacements are white.)

However, Mariah comes from an African American ‘mafia’ type family. She’s tied to her cousin, Cornell ‘Cottonmouth’ Stokes (Mahershala Ali), a crooked club owner and gun runner. While Cornell is ruthless, willing to murder to achieve his ends, he’s complicated with a somewhat-sympathetic backstory showing his grandmother destroying his dreams, forcing him to become a thug.

In contrast, Grandma supported Mariah studying law and getting out although there’s more than a hint of Lady Macbeth in Mariah.

The Cranberries’s song ‘In the Ghetto’ could be the soundtrack but the bands and singers in this series are all black. Incredibly talented musicians all, with songs that add to the story. There’s more than a hint of Buffy‘s The Bronze but this time the singers really are all bronze, playing at Harlem’s Playhouse (Cottonmouth’s club) for adult audiences. Not THAT kind of adult audience, it’s all PG except for the murder, mayhem and drugs.

Detective Misty Knight (Simone Missick) is the inevitable cop trying to walk a straight line through the twisty backstreets of Harlem. I was a fan from the time she first shows up and schools some teenagers on a basketball court.

Misty’s partner Detective Rafael Scarfe (Frank Whaley) is the not-quite-token white guy. The two have a great rapport as professional partners but both step aside from appropriate policing methods to keep their secrets while reaching out to the community.

Luke Cage is an intelligent man with a past. Luke reads. He talks about books. Book Riot did a books-in-Luke-Cage post. Can they get a ‘hell yeah’?

Watching this series was interesting. After the recent spate of shootings in the US, a couple of which I actually watched, there were times when I was calling foul. ‘That’s unrealistic, no way did the police not shoot’, that kind of thing. This year has been a real education and not in a good way.

However, in the last few zodes where Harlem’s residents want to support Luke Cage so big men wear shot-up hoodies, I was almost cheering. I wonder how many people are wearing holey hoodies in real life to identify with the power of the bulletproof man. Unfortunately, if that had been real life, police would probably have shot innocent people first and asked questions later. Luke Cage communicates the truth of racial violence in a positive, powerful way.

I cannot comment on the representation of Black culture. However, I loved the nuances exposed with the use of the term ‘nigger’, always used by people of color, some of whom use the term while others object. This is similar to re-appropriation of terms like ‘crip’ and ‘queer’ by the disabled and LGBTQIA communities, both terms causing conflict.

Luke Cage isn’t flawless but it is a kick-ass show that stands head and shoulders above the bulk of television series and will become a classic, showcasing both culture and talent rarely gathered together. Although different from Jessica Jones, Luke Cage is just as good. Highly recommended.

Rating: 5 out of 5 stars (because most TV only deserves 2 to 3 stars)
Starring: Mike Colter, Simone Missick, Theo Rossi, Alfre Woodard
Running time: about 55 minutes per episode for 13 episodes 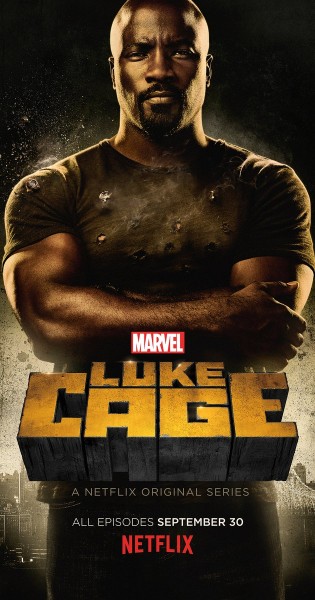