Lovebirds as a title may be a little misleading; it certainly didn’t align my expectations with the novel. However, the cover page also says “Not all marriages end in happily ever after…” The only love birds in this novel are not the feathered kind. And Hampson has written eloquently, realistically and romantically but this is not your average romance novel.

The plot is twisty for a contemporary novel without a scent of “whodunnit”.

Lovebirds starts with Elizabeth trekking to her former hometown for her best friend’s – Ginny’s – funeral, only to find herself excised from Ginny’s family. Instead of delivering a eulogy, Ginny’s children punish Elizabeth. She had previously pointed out that their mother dying of cancer and perhaps they should be supportive instead of demanding.

Also, as a parting “gift”, Ginny wrote Elizabeth a letter and arranged for her to stay at Ginny’s sister’s place instead of the family home. After decades of warfare or, at best, an uneasy truce between the two, this emotional time was not the best time to attempt a reconciliation.

Thus Elizabeth sleeps in a grotty caravan park. And struggles through the funeral the next day before fleeing.

Only to attempt reaching out to members of her own family.

The first big social issue mentioned is the Big C. Not only did Ginny die of cancer but Elizabeth’s estranged daughter-in-law has cancer and an operation coming up.

Meanwhile, her son who is also Elizabeth’s grandson, Zach, has gone off the rails and is facing juvenile court for setting his surf lifesaving club on fire. Accidentally.

Elizabeth was a girl from the country who made good. She moves to Sydney as a teen – we see her growing up in flashbacks – then she goes to uni while raising her kids. She becomes a probation officer then is more active in research and influencing policy regarding the penalty system. When Lovebirds opens, she is retired, voluntarily, for reasons we learn later.

This history is crucial to the story. Elizabeth goes from being a girl whose parents believe year 10 is enough schooling for a girl to having an influential career caring for people who’d fallen foul of the law. Her son Tom is in jail and her grandson Zach could well serve time if she can’t intervene constructively. The problem is, she’d opted out of Zach’s life a year ago and he feels abandoned, distrustful of her renewed interest.

Is that enough social issues for you? But wait, there’s more!

Elizabeth’s husband, Ray, was a Viet Nam vet who went AWOL 30 years ago and she hasn’t seen him since. Something’s wrong so she sets off, with Zach, to find Ray.

As the story unfolds, slipping between the present and flashbacks, we learn about Elizabeth, Ray, the trauma of being a Viet Nam veteran and how that impacted their family.

With all these ingredients you’d think this story would be depressing but it’s surprisingly beautiful and definitely funny with occasional glimpses of Elizabeth’s heartbreak. We learn how Elizabeth tried to cover for everyone, tried to protect them. And probably made things worse because there was too much “blind eye” and not enough honest talk. All this unfolds on a healing journey.

Did I mention that it’s funny? Between Eric the budgie (who talks), the evil goat, a teenager, and another Viet Nam vet who is QUITE the character, there are laugh out loud moments.

This contemporary and historical novel centers a “woman of a certain age” (her sixties) having an adventure. Lovebirds will appeal to many women who rarely see themselves in stories. However, it has considerable universal appeal in the family dynamics, the diversity – one of Elizabeth’s daughters in law is Chinese – and also the trauma of war. As Amanda Hampson says in this podcast, how the trauma is enacted, inflicted on families, is even carried down generations in DNA. Families of much younger vets may well identify. Most powerful in this story is the healing Hampson depicts withOUT melodrama. And the comedic highlights are priceless. 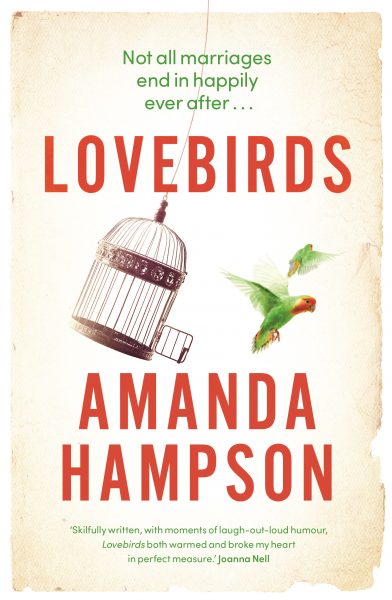