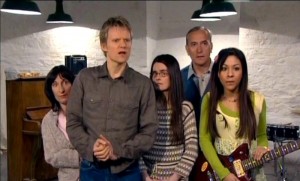 Elton (Marc Warren: Hustle, Hogfather) meets Ursula (Moaning Myrtle from Harry Potter) who, in turn, introduces Elton to a bunch of ordinary people whose lives have been touched by the Doctor. Initially they share their experiences like a support group. Later they become friends, sharing their lives in various ways until a stranger – a bully – imposes his rule over the group, destroying their fun, driving them to investigate the Doctor between snacks.

Elton is tasked with contacting Jackie Tyler (Rose’s mum) to build a relationship to help them locate the Doctor. Jackie is more effective in building this connection than Elton, whose social skills are significantly lacking.

‘Love & Monsters’ reveals Russell T Davies’s low opinion of Doctor Who fans as he exploits every stereotype: geeks & nerds who lack social skills, living inadequate lives, are attracted to basements and don’t connect with their friends when the alien separates the sheep from the sheep.

Worse yet, the Doctor and Rose are out of character in this story. The Doctor is an arrogant ass who ‘saves’ someone to live a ridiculous life while Rose is more concerned with her absent mum than with the human-eating alien standing right in front of her.

This episode more than any other left me with a foul taste in my mouth. Star Trek did this SO MUCH BETTER.