A small American coastal town has quirky characters played by big name actors. A bookshop owner, Helen MacFarquhar (Kate Capshaw) finds a love letter. It’s not addressed to anyone specifically nor is it signed but, sure, she decides it’s for her. She sets about trying to discover who it’s from. Cue comedy.

Her employee, Janet Hall (Ellen DeGeneres), is fractious, late and constantly talking about sex. And not the lesbian kind. Janet finds the love letter and assumes it’s for her from George (Tom Selleck). Helen says it’s hers. They argue. Ellen quits. Cue more comedy.

And so it goes.

Ellen plays a straight sex-hungry woman, which is disappointing. The town is mostly white. No one is disabled or particularly different. However, creators have billed it as a “quirky” movie with a white nondisabled areligious cast. Redemption arrives in the form of an adorable queer romance as a minor sub-plot. This romance does NOT include Helen/Ellen although she officially came out in 1997. I guess that was part of the humor?

The Love Letter is a watchable rom-com that has more potential than it delivers. Rotten Tomatoes gave it 33%, which seems a little harsh. However, it is not Dreamworks’ finest movie. 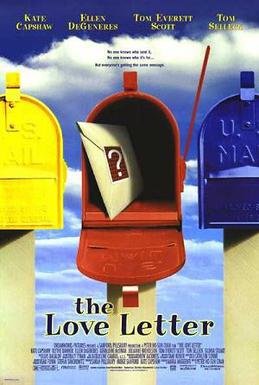