The Love Hypothesis is another romantic comedy recommended during a Science Fiction Writers of America (SFWA) romance writers’ event. The full list of recommendations is here.

Olive Smith is a postgrad student at Stanford, with a “chosen” family of two: Anh and Malcolm, the latter of whom is her roommate. Late one Friday night, Olive kisses a random stranger in the hallway for reasons associated with her besties. She loves them with a fierce passion and would do anything for their happiness.

But the random stranger turns out to be Professor Adam Carlsen, notorious within the department for causing tears and students dropping out.

Cue romantic comedy with all the associated tropes and a protagonist who ponders said tropes during her internal monologues.

Anh and Olive met at their first day in STEM at college, when Anh plonked down on an adjacent seat to make a pithy comment about how they were the only non-cis-white-males in the room.

Admittedly I read too much into this comment. I decided Olive was trans, convinced after Hazelwood described her slight physique. I even invented a whole backstory: her mother was the person who died of pancreatic cancer and her father rejected her when she transitioned. One out of two correct is a passing grade, right?

As a woman who, at uni, had STEM women colleagues, I feel confident approving Hazelwood’s representation of women in STEM. I believe that Anh is excellent representation of PoC as well: she’s smart, funny, loyal, bossy, endearing, and – subtext – a ferociously good researcher. If you’re PoC yourself and would like to enhance my observations or (gulp) contradict me, please comment below.

Malcom is gay or bi or pan, I’m not sure which. He’s fucking his way through academia while having a massive crush on a hottie professor. As a roommate he leaves something to be desired. But he is a good friend to Olive. Malcolm goes beyond the comedic sidekick so I believe he’s good representation for the LGBTQIA+ community as well.

Throughout the novel, Hazelwood refers to Title Nine, which is USA law apparently making it a federal crime to assault or sexually harass someone on campus. At first it’s a joke but that’s foreshadowing of course: an author of Hazelwood’s calibre is totally going to foreshadow.

I don’t know how different the USA is to Australia so I’m going to use my experience in Australia to post a warning here. While I love what Hazelwood wrote, this protection does not apply in Australia. We have general discrimination laws including the requirement that educational institutions proactively educate people before and after incidents to prevent recurrence. No one polices it. Legislation puts the onus onto disabled people to police. And, when senior staff at a university want to be utter c___s, no one stands in their way – unless you have half a million or so to spend on legal fees.

The University of Canberra had a serial rapist on staff who was only fired after he was literally sentenced to jail as a serial rapist. I recall reading the internal email stating that UniCanberra fired Arthur Hoyle. And I’m 99% sure that the university didn’t fire him at the guilty verdict, THEY WAITED UNTIL THE COURT HANDED DOWN A JAIL SENTENCE. Also during that time I read emails and articles where the university seemed to me to be justifying the rapes or in some way exonerating the rapist because of the allegations of plagiarism.

In 2017 and 2018 a colleague repeatedly assaulted me on campus. At first she said “I can’t help myself, I’m such a nice person”. I can’t even. She used to literally grab me whenever we walked together. Every single time I stopped, told her to let me go, and waited until she did before I moved again. The last time she nearly pushed me down a very tall flight of stairs. I reported this to my supervisor because, by this time, I was scared this woman would kill me then claim victimhood. After that, her assaults were intended to hurt, to push me backwards while I was walking through a door I’d opened and other incidents. Dreadful woman.

The first time I met with my supervisor for supervision she told me she would not meet with me for supervision. I was to email her notes from my research. The second time I met with my supervisor, it was to discuss the assault and near plunge down those stairs. After that I had a brief respite from assaults by that woman but she later escalated again, including inflicting bruises.

In May 2017 panel then said they supported me upgrading to a PhD because my work was excellent and further ahead than expected. But then my supervisor refused to meet with me regarding my research until February 2018. She deferred my confirmation seminar because SHE was too busy TO DO HER JOB. Then, in February, she said let’s collaborate on a project researching highly offensive memes about people with albinism. This was after she stopped me from collaborating with a secondary supervisor because no one was using her student for unpaid work for which they’d get credit unless it was her.

In March 2018, she told me IN EMAIL that I had a week to come up with an entirely new research thesis. I asked for an extension. She refused, which is a violation of my disability access plan (I was entitled to a week without justification). When I went over her head for that extension, she quit as my supervisor and told my secondary supervisors not to take her place. Her emails!

I just wish I had the same problems with my supervisor as characters in the Love Hypothesis.

In May 2018, an associate professor from a different faculty assaulted me in the refectory. Within hours she admitted to the assault in email. Because she replied to all, she emailed the Dean of Students and Campus Security. She didn’t apologise; she blamed me for “disturbing [her] concentration” in a very busy noisy refectory. Basically, because I was talking on the phone several metres away, she leapt out of her chair, rushed over to me and, without talking to me, pushed and shoved me about 20 metres, steering me around other people and furniture. No one stopped her even when she nearly pushed me over while forcing me to stagger sideways.

No one responded to my complaints other than to reject my attempts to lodge a formal complaint.

I emailed the vice chancellor.

He delegated to a deputy vice chancellor.

The DVC emailed me to threaten suspension or expulsion for complaining about the assault.

I asked if that was how they dealt with the serial rapist’s victims until a few brave women finally helped put him behind bars.

The DVC delegated to the Dean of Students who, allegedly, conducted an “investigation” that consisted of talking to the perpetrator and one other staff member and destroying the CCTV footage “because reasons”.

Then they suspended me.

Their letter of expulsion specifically states that the reason they expelled me was because of their fear that I would talk about what had occurred.

Look how well that worked out for them.

I still have their emails, including that letter of expulsion.

I want to warn everyone that coming forward is difficult and dangerous. Think of the Lehrmann trial, where the alleged victim of rape was crucified on the witness stand for three days. Meanwhile Lehrmann wasn’t even quested as to why he gave at least 3 conflicting stories undermined by the evidence. That trial ended as a mistrial in highly suspicious circumstances, with the Director of Public Prosecutions also admonishing the police for undermining his prosecution.

Admittedly that alleged rape was in parliament house, not on campus. However, publications like the Canberra Times reported that victims of sexual harassment and assault at UniCanberra continue to live and work alongside their abusers even after the serial rapist verdict. It’s that or the victims must leave. The Canberra Times reports that 1 in 6 students say they’ve been sexually harassed and 1 in 20 say they’ve been sexually assaulted. Those statistics are total students not just women.

I spent New Years Day crying and ranting because, although I thoroughly enjoyed this story that I was half way through at the time, it was highly triggering for me.

Be informed and be careful. Stay safe. Also, read How Many More Women if you’re in the process of making a decision. Get support and surround yourself with good people.

Unfortunately the Love Hypothesis is another one of those stories that doesn’t model safe sex. Before sex one character says “I’m clean” as justification for not getting a condom. No. Not good enough. So loaded. Such a bad example.

Although both parties had rarely had sex previously, it is good to model safe sex during sexytimes. Condoms and other prophylactics can be sexy. And how do younger readers learn, how do they come to believe in safe sex if not modelled?

I didn’t know about prophylactics for oral sex until I studied sex education as part of my Master of Social Science. This kind of learning should be modelled in books like the Love Hypothesis. I’m imagining the romantic leads going together to buy prophylactics during a really charged scene. It could be hilarious and escalate sexual tension.

Living in the future is awesome. Used to be that audiobooks were AWFUL. But now professional narrators read or perform them. The Love Hypothesis’s narrator, Callie Dalton, has a certain tone that I interpret as slightly flat, associated with snark, assertiveness and a certain style of comedy.

Romcoms must be hard to narrate because the tone of narration sets the tone of the story. Dalton’s narration is great, never sliding into a whiny melodramatic tone that I associate with a different romantic fantasy adventure narrator. I want to listen to more of Dalton with Hazelwood’s stories and other similar stories.

The Love Hypothesis is a fun romcom set in a college or university (depending on your culture), focusing on women in STEM (science faculties). Side characters are people of colour or gay, interweaving more romantic entanglements.

My personal experience at university is unusual. I was disabled while trying to do a PhD on representations of albinism, which would have been a world first! The University of Canberra also listed me as an international student despite my request NOT to be included on that list. So they put me in nearly every minority group to improve their statistics then treated me like shit. Staff assumed they could silence me one way or another. Therefore the Love Hypothesis was triggering for me although most people would wonder why.

The Title Nine issue, sexual harassment on campus, causes an emotional spiral for the victim although Hazelwood handles it the way I hope (but no longer believe) any institution would handle it. However, I recommend careful interrogation and research before lodging a complaint; remember this is fun fiction NOT real life.

Hazelwood’s modelling of unsafe sex with the loaded “I’m clean” statement horrifies me and is the only reason I’m not giving the Love Hypothesis 5 stars. 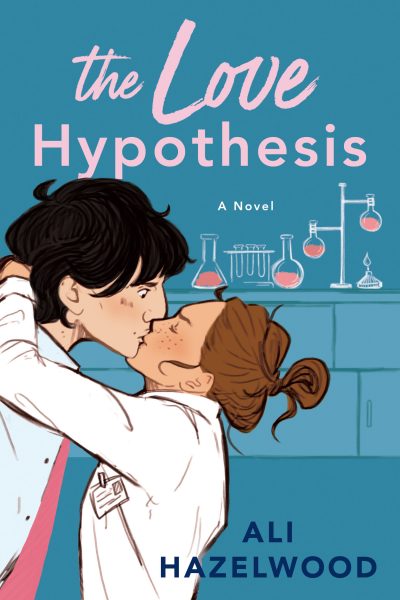 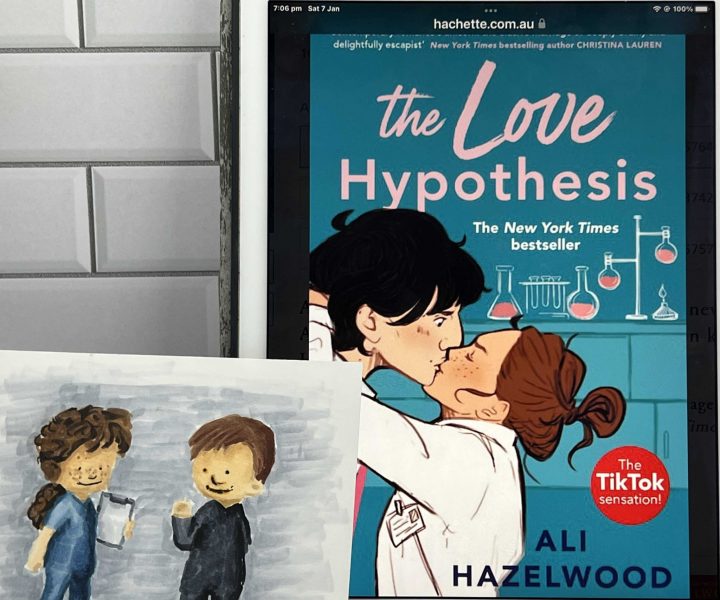 Google now punishes websites for not using their own photos on posts. So, the bar raised, I’m trying to comply while gnashing teeth and ranting frequently. O for the days when copying a book cover from the publisher’s website was acceptable!