Forget John Dies At The End. Twig dies at the beginning. The Afterlife is a treacherous place where gods eat the memories of the deceased, making the Afterlife a kind of hell for lost souls. Ensnared by the gods, Twig follows the path that will end up with the gods eating his memories. That is, until he hears a pennywhistle (like a recorder but nicer sound) from the forest. It reminds him of his life, of his father. He follows the tune to meet the Gatherer who gives him the Lost Soul Atlas and a quest: cross over, leaving bones on the other side so the living may keep their ancestral memories. The alternative? Loss. Great loss.

Every time Twig crosses over, he remembers portions of his life. Thus we unravel the mystery of Twig’s life while he unravels the mystery of his death.

When Twig arrives in the Afterlife, Krruk, a raven skeleton, becomes Twig’s guardian. (Fraillon seems to have a thing with bird skeletons. Sadly, a quick google does not reveal any drawings of the bone sparrow. And it’s too early for Krruk portraits. I need fan art, stat!)

Krruk tells us – repeatedly – that ravens are good fortune, that raven feathers are lucky. And we, with Twig, encounter raven feathers over and over as if it’s the first time. I feel as if Krruk’s feathers imbued with oil-slick rainbow colors are now embedded in my soul for safe-keeping.

Possibly the most remarkable thing about Krruk – apart from his arrogance yet likability – is his voice. He sounded exactly like one of Terry Pratchett’s characters. After watching every Terry Pratchett TV series and movie repeatedly, Krruk inevitably spoke in Death’s raven’s voice. If you want to know what that sounds like, I recommend Hogfather (2016).

Aspects of the Lost Soul Atlas resonated as if this novel is the new Phantom Tollbooth, a book I first read in middle primary school. However, the Phantom Tollbooth was a lesson for a bored child (read books and make your own adventure) while Twig’s story is about family, loyalty, homelessness, corruption, and integrity. I hope the Lost Soul Atlas is, like its predecessor, indelibly imprinted on the pop culture zeitgeist.

Zana Fraillon does not identify as a pop culture aficionado, which is difficult to credit after reading Lost Soul Atlas. Her research includes looking at star dust in a museum in Scotland, not watching Delenn on Babylon 5 nor reading or watching Neil Gaiman’s Stardust (2007). (The book is, inevitably, better but Robert de Niro’s camp pirate doing the can-can is to die for.)

Ha! I discovered this fact about star dust at a museum in Scotland! I thought I was being original…so much for that…

I started keeping a list of pop culture references but I gave up. Too many homages. Or what you’d think are homages. I enjoyed these references regardless of the author’s intent, and believe they will enhance enjoyment.

Except for one. When I was in grade 8, my English teacher made us read horror stories for a few lessons just to fill in time. Two of those short stories have stayed with me over the years. One of which is, in a child-friendly form, in this book. Let’s just say, when I was little I loved snails and their trails AND I DON’T ANY MORE. And my reaction to Fraillon’s snail scene was more extreme than she could possibly have intended because of that particular horror story. THANKS ZANA.

If you’ve been reading my reviews for any length of time, you know by now that I’m passionate about social issues, equity, justice and all that stuff – but I’m not interested in being preached at in my escapist fiction. You could say I’m difficult to please. I can’t hear you say that so I won’t respond.

Fraillon is passionate about social issues too. For someone who appears to come from a middle class background, she’s incredibly switched on. Combining intensive research with empathy for the downtrodden and love for her characters results in excellent representation and the possibility of learning-by-stealth while you’re reading for enjoyment.

Twig is the central character but Krruk, the raven, and Flea, his androgynous best friend, come a close equal second. Fraillon again does not preach. She does not define Flea in any way other than in Flea’s own words to Twig, once, followed by Twig consistently using “they” and “them” pronouns for Flea. Yet again – twice today in fact – I’m reviewing a book that is following Will Kostakis’s ideal of “focusing on the butterfly” and not the trauma of coming out.

From Border Protection to homelessness

The Lost Soul Atlas starts with undocumented migrants living in fear of deportation before Twig, the child-migrant who lost his father, moves in with homeless children. Making money to survive as a street rat, avoiding junkies, thugs and Border Protection, are all part of Twig’s day to day life while playing with his friends. This sounds depressing but, remarkably, Fraillon made Twig’s life engaging and even optimistic. Bone Sparrow, The Ones That Disappeared and Wisp: A Story of Hope are all similar in that Fraillon takes issues that you’d think couldn’t be child-friendly and yet she imbues such relatability, hope and optimism in these stories that children love them. Stories like these help shape the next generation, the psyche of readers, so we become a less bigoted and less barrier-filled society.

If you’re interested in listening to Zana talking about her research and some of these social issues that include very real child slavery, poverty in rural Australia and refugee slavery, listen to these two podcasts in 2020 and 2016. These podcasts are great teaching resources. I certainly learnt a few things during the podcasts despite my research into Fraillon prior. (The podcasts are available on this website and on all good podcast platforms.)

One final thought on this novel. Fraillon talks about memories and how we’re lost without them, how we need them. This is a psychological theme, especially in cognitive behavioral therapy and never more so in narrative therapy. Narrative therapy, after all, takes our stories, “pans for gold”, then reinforces the positives IN COMMUNITY.

Narrative Therapy’s founder, Michael White, did things like get clients to engage again with that one teacher they had back in primary school who believed in them. An abused child rescued from abusive foster parents could not cope with going to the toilet because it was such a site of trauma, so White worked with her new foster family, a community painted a mural in the toilet, all sorts of strategies were put in place. But most of all, there was a loving and supportive COMMUNITY. (I haven’t included references because I heard these stories and more at a few of Michael White’s training courses.)

Likewise, Twig needs a community to survive. Family is a strong theme throughout. I’m a huge fan of people not going it alone but needing others!

Memories are inextricably linked with stories and both are essential to the Lost Soul Atlas.

If you’ve read this far – why haven’t you stopped reading and just ordered the book? – you probably realize what I’m about to say next. Twig is a lovable yet flawed character who embarks on an engaging hero’s journey that is more entrancing than the Phantom Tollbooth. His guardian raven is Terry Pratchett’s raven reincarnated – how fitting! The Lost Soul Atlas is the Ten Thousand Doors of January but overtly aimed at a younger audience. Don’t let that stop you though: with its nostalgic undertones, pop culture references and contemporary-feeling setting, it’s an excellent read for adults too. 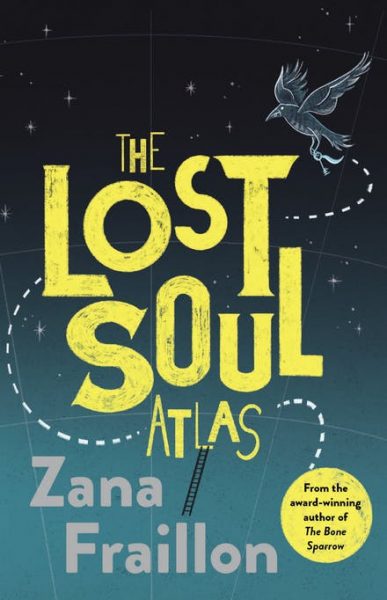