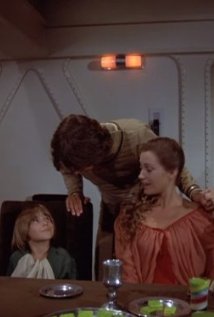 What the girls aren’t telling the guys is that Commander Adama (Lorne Greene) has authorised officers to train the wominz to fly ships. At first it’s just shuttlecraft but, when things become desperate, these former secretaries are promptly bundled into fighter ships to save the day.

Apollo is very unhappy when he sees Serina in her warrior’s uniform. Serina sweetly informs him that if he’s a misogynistic dick then it’s a deal breaker. Apollo sees sense, embracing his beloved and her entire feminist personality (literally as well as figuratively).

The reason for impending doom this week is that guys intent on Apollo’s bachelor’s party skip decontamination. They promptly fall ill as does everyone who has come into physical contact with them except the doctor. Anyone would think the Cylons infected them with a virus, using a new biological weapon against humanity just when 2 idiots are too obsessed with drinkies to follow mandatory procedure.

The flight action is a nice save on the part of the ladies although I actually wanted at least one collision, preferably fatal, to lend a bit more authenticity and grit to the story.

One of my main memories of the series from when I was a kid was the repetitive shots of fighters being launched. This episode featured every. single. launch. Some are from slightly different angles. Yay.

I should mention: the ladies go into decontamination. Because they’re not stupid. [eyeroll]

Apollo and Starbuck discover a void through which no stars are visible — except for when they are visible. And it’s not possible to navigate because no stars are visible so Starbuck fires his weapon then flips 180 degrees to fly back the way he came. Of course Apollo couldn’t have done that on his own. With the visible/invisible stars and all. I have a feeling this void will be the saving of them all. Stay tuned for the next episode [Dun, dun, DUNNN.]

Although the story was up and down and the pacing was at a snail’s pace, the basic plot worked. The need for women to be liberated to stand side by side with men, partnering in the work as in World Wars I and II, was a very pointed story thread. Starbuck is a dick and Apollo is a keeper. The women come across as vapid but maybe not so much. The steno-pool is armed and dangerous so look out!

I think this classic series is best watched with a peanut gallery and, depending on your preferences, plenty of alcohol. I couldn’t sit down to watch it alone unless I wasn’t actually sitting down: I’d need to be doing something else as well, like exercise or a chore that allowed for multitasking. However, as an artefact of its era, of science fiction, of the tension between entertainment product and sociological comment, ‘Lost Planet of the Gods’ pt 1 has definite strengths.