London Has Fallen is the shameless sequel to Olympus Has Fallen (2013), a movie where terrorists attack the Whitehouse so Sekret Sekurity Man (typos intentional) has to protect the president, take out the bad guys and reclaim the Whitehouse. So how does one make a sequel to that action-packed thriller?

By having terrorists attack London during preparations for a state funeral, killing 5 heads of state and thousands of civilians while aiming for the US president who’s the only one actually heading to the funeral but, hey, he’s also the one that gets away. Because Murica.

Once again, Aaron Eckhart (aka Chin Dimple) is the president with Gerard Butler looking rather grizzled as secret security man Mike Banning. Instead of having ‘cute kid needing rescuing’ trope, Mike’s wife is pregnant and about to drop her bundle. Mike is thinking about resigning so he can spend more time at home with the fam. Being broke. Although I guess ex-Secret Service peeps can probably get work elsewhere. He’s nearing retirement or desk-job age anyway.

I enjoyed Olympus Has Fallen in spite of silly plot points. I mean, who doesn’t enjoy an attempt to recreate Die Hard in new and interesting ways? Yippee ki yay. My expectations were low but I wanted splodeys and humorous dialogue. I got the splodeys. And, in London Has Fallen, they have bullets on fire. It looks like laser fire or an FPS made so you can see the bullets, they were running tracer rounds. Both terrorists and the good guys. In the middle of a not-training-exercise action movie. Additionally, I’ve seen Mythbusters, I know guns have an explosive reaction to send the bullet on its way, but London Has Fallen has fireballs around the guns threatening to ignite the shooters.

It opens with a wedding in a compound in Kumar bombed by the US because the father of the bride sells weapons to people the US doesn’t like. Later he challenges the president on US hypocrisy but it doesn’t fly because BAD GUY.

The father of the bride, Kamran Barkawi (Waleed Zuaiter) survived but limps and uses a cane. Brother of the bride, Sultan Mansoor (Mehdi Dehbi; I don’t know why the family names are different for the characters) survives, legless, in a wheelchair. He’s bitter. So not only are we going down the ‘Middle-Eastern Terrorist’ path but the ‘bitter evil disabled person’ trope is entrenched too. YAY.

Let’s not talk about the Bechdel Test. Very occasionally more than one woman is in a room at one time but I don’t think we ever see them without men. I doubt women even make up the usual 17% of crowd scenes. There’s a girl who gives a flower to a middle aged woman just before they’re both shot. Women are plot points, motivators and humanizers for the menz.

Oh, and the non-Morgan Freeman token black person who also happens to be a woman? She’s the only one getting upset (almost hysterical) while the guys are stoic although she’s a professional. Then she cries. Then she dies somewhat heroically while the white guys soldier on.

The bad guys execute an amazing and completely unrealistic terrorist coup within London with thousands of double-agents posing as police officers and paramedics and palace guards. No international intelligence agency caught a whiff of impending doom and all these trusted public servants were in place in time to stage massive shootouts at various points in the movie.

The precision of the terrorist coup was amazing. As in, completely unbelievable. Only the US president escaped because he arrived 10 minutes earlier than planned.

Movie-makers want to ramp up the stakes in sequels but this was unbelievable and, quite frankly, somewhat boring. Shootouts between palace guards who conveniently split into two groups and shoot each other. Repeat with the police. Ambo pulls up and starts shooting. [yawn]

There’s some dialogue early on that is humorous but as the shooting ramps up the story and characters flatten into cardboard cut-outs doing stoopid ‘because plot’ things like, Iunno, TALKING ON THE DEAD GUY’S RADIO FOR NO REASON AND TELLING THE TERRORIST WHO MIKEY-BABE IS SO THE BAD GUYS KNOW WHERE THE PRESIDENT IS. YAY.

Mike Banning got stabby and so did I.

And Morgan Freeman’s role was to connect with Mikey-babe so later he could give a passcode to convince Mikey his radio call was real. SO HE COULD TELL THE TERRORISTS OVER THE AIRWAVES WHERE TO FIND THE PRESIDENT.

OMG. London Has Fallen is there for the splodeys. The minion and I had to say our own lines like ‘Now I have a machine gun, ho ho ho’. The penultimate stupidity is when Mikey and the President (the name of my next band) are trapped between — note, BETWEEN — two lots of terrorists shooting at them so Mikey shoots in both directions and kills everyone. [eyeroll] No humor, no fucking thought put into it at all. No, wait, the penultimate stupidity was the actual explosion. Seriously. THAT scene is so unbelievable IT MUST BE SEEN TO BE BELIEVED that they actually put that crap on the screen.

At the very end, the Americans declare war on terrorism. Again. With no thought to humanitarian aid defusing the situation nor how their murder of families, women and children is creating martyrs and survivors who join terrorist groups.

I’m giving London Has Fallen two stars. Only watch if you want splodeys with a little humor. Die Hard it ain’t, baby! 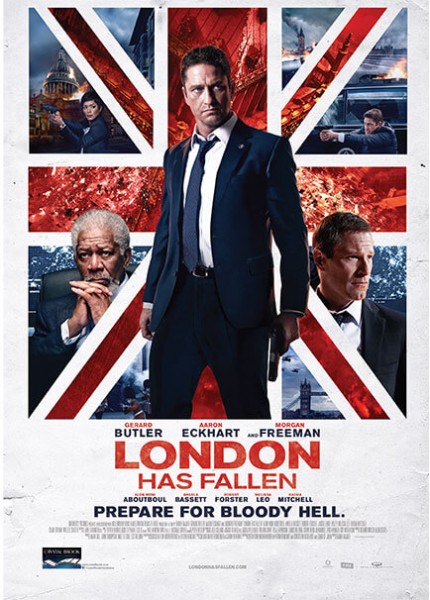