a review by James Kennedy

Life, Liberty and the Pursuit of Sausages takes ‘normal’ British life and makes it increasingly surreal. The story focuses on office worker Polly and her brother Don (who reminds me of the man who nearly adopted Juno’s baby in the film Juno), whose lives become punctuated by increasingly bizarre episodes. The story is set in modern-day Britain, and British references are glaringly obvious on every page.

Bizarre incidents begin after page 53 when Don’s desk snaps completely in half under the pressure of a brass pencil sharpener. What’s equally strange is that it repairs itself on the same page, and this doesn’t seem to surprise Don in the slightest. The book is very ‘normal’ up to this point so I started to rationalise the desk’s breakage logically—Is it a folding desk? Is is actually a portable picnic table? By the time I realised that book was logically irreconcilable, I was already 30 pages from the end.

More bizarre events include shops, houses and streets that vanish (becoming green fields) overnight, Mr Huos being translocated suddenly up a mountain, the introduction of seemingly irrelevant, disconnected storylines, and a Ford Cortina being driven by a flock of chickens. Characters take notice of these surreal events about halfway through the book and start referring to the “It” and then “magic” influencing their lives. The most obvious piece of “magic” happens when Stan Gogerty meets a real-life CGI gingerbread-man copy of himself—an impossible meeting that gives him great insight into the perpetual “chicken and egg question” that emerges later on.

The most subtle piece of ‘magic’ in this novel is when two characters morph into two of the other characters. This could be easy to miss. On page 152, we meet Mary and Martin, whose relationships with Mr Huos and with each other seem remarkably similar to those of Polly and Don, who we met in the first chapter. Then, between pages 152 and 158, the storyline of Mary and Martin becomes the storyline of Polly and Don! Page 152 uses the former pair of names (just once); page 158 uses the latter set of names (twice), and the pages in the middle use pronouns (he, she and Mr. Huos) to disguise the subtle transition. This happens again later when we learn that Rachel, Polly and “dozens of others” work simultaneously in the same office for Mr Huos; and again when Ed Hopkins, Jack Tedesci and some other characters all discover the houses they bought just yesterday have gone missing.

British humour is found throughout. Most obviously, it’s in the sheer absurdity of the plot (we Brits find that funny in itself). Finding humour in futility is also a remarkably British trait, and the introduction of apparently irrelevant storylines (such as the motorcade of world leaders) and the intermittent discussion of the “chicken and egg question” serves that end very well.

I grew up in Britain, and therefore found such overtly British jokes as “…like what would happen if the Tardis’ navigation system got replaced by the computer that runs baggage handling at Heathrow” and “…like the M25 tailback in ‘92 that became so dense it achieved critical mass and collapsed into a black hole” much funnier than if I’d grown up elsewhere. The more subtle jokes, though, such as, “caught the Tube at Livingstone Square” on page 222, might only be intelligible to people who have lived in London for some time. In fact, some of the jokes in this is novel are so British that I question whether non-Brits would find them funny at all.

There are also many similes and metaphors that use animals—I counted a daddy long-legs, a “goldfish impression”, two elephants, three cats, and dozens of chickens and pigs. The best animal reference of all was, “still looked very sad indeed, like a spaniel whose bone was stolen by an Alsatian”. Animal references made me smile in many places.

I strongly recommend this book for those with an appreciation of British humour. When reading it, challenge yourself by seeing how long you can keep track of the logical inconsistencies in this book. Treat it as a mental exercise. I’ve attached a character map below, to which you can refer if you get stuck. # 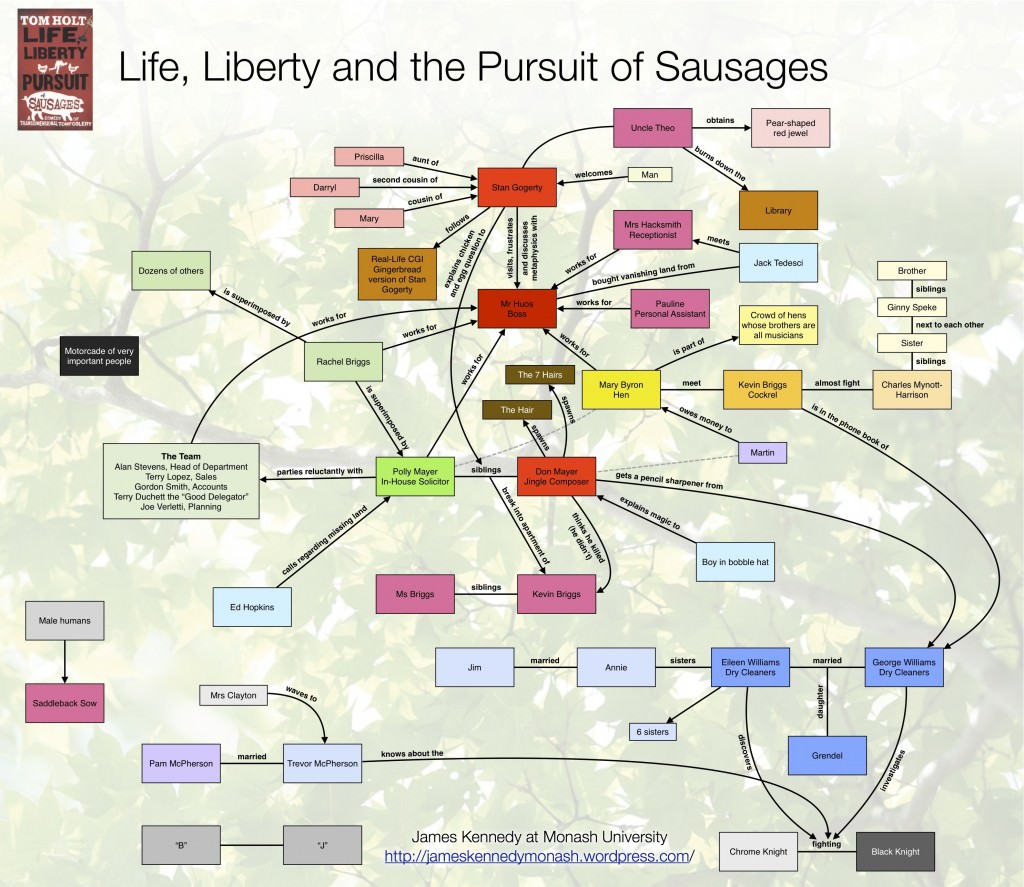