Aftermath 1 brought together a new rag-tag group working for freedom in the name of the Rebellion/New Republic while the tattered remnants of the Empire fought for survival, planning a war to recoup their losses.

Aftermath 2: Life Debt rejoins our rag-tag band while they’re breaking into strongholds to kidnap — I mean capture — people on the New Republic’s most wanted list. Norra and her son, Temmin, are getting along better. The rest of the crew is — entertaining. They’re not a cohesive Star Trek unit, that’s for sure.

Wedge Antilles has a crush on Norra. (Sings like Sandra Bullock in Miss Congeniality. No, actually, I can’t; I sing more like the Bard in Asterix. But I can live in hope.)

Chewy and Han Solo were separated in book 1. Chewy is probably a prisoner of the Empire so Solo goes solo to free him but things go to hell in a handbasket as usual.

Meanwhile, the Twin Question is answered. Leia is pregnant and knows what she’s going to have. And I’m not going to spoil the surprise.

Grand Admiral Sloane controls the Empire but Rax, a shadowy figure without a discernable past whose motives are unknown, controls Sloane. Rax is the new Palpatine (from the prequels): watch this dude.

While I enjoy Star Wars I’m not a ‘fanboy’ so I didn’t recognize ‘a castle’ as THE castle from the Force Awakens until a little late in the piece. I didn’t recognize the castle-owner’s name and relied on descriptions to make the connections, thus missing some of the fan services. I missed other cues and picked up on things late. I’ve said it before and I’ll say it again: an optional pre-prologue recap would be excellent.

True to book 1, Life Debt follows through with queer characters and relationships as well as other romantic relationships. However, I wanted more emotional connection as a reader. The most prominent romance is Jas and Jom. Jas is a bounty hunter and a female Han Solo-type with debts that worry her, motivating her to pursue lucrative avenues. Jom is a male Leia-type in this romance. They have sexytimes but, in their internal dialogue (where most of this ‘romance’ takes place), they don’t want to be involved with each other, they’re just horny. Jas and Jom didn’t quite gel for me, perhaps because I prefer sexytimes to come after they’ve decided WTF they’re doing. (Pardon the pun.) Personally, I’m shipping Wedge and Norra, they’re adorable.

The language used to describe Wookies shocked me. Although the non-Empire Star Wars universe has some diversity in human actors and the later movies are more inclusive, the Star Wars universe tends to be rather white so aliens stand in for diversity. When reading from a career Empire soldier or bureaucrat’s perspective, it’s understandable that bigoted epithets like ‘beast’ describe Wookies but Wookies should be PEOPLE for everyone in the New Republic, an organisation that embraces diversity and recognizes the intelligence and selfhood of Wookies. I was especially shocked that Han Solo thought derogatory epithets like ‘beast’ when describing Wookies.

Life Debt passes the Bechdel Test because there are several independent women with have agency who — shock, horror! — talk to each other from time to time. I hear millions of voices suddenly crying out in terror.

I loved Aftermath book 1 because it was more like the original movies and books than Timothy Zahn’s first two books in THAT trilogy. Life Debt is more like Zahn’s earlier books, which will please lots of fans. I prefer character work over the sense of setting up disparate chess pieces. It’s Second Book Syndrome.

Star Wars Aftermath follows in the tradition of what has gone before, both in books and movies. In Life Debt, Wendig follows through with normalizing queer relationships although dedicating the most space to heterosexual romances in scenes between the chess pieces moving around the board and splodey bits. Wendig knows his Star Wars well, incorporating numerous references and parallels to the original trilogy. I highly recommend Life Debt for Star Wars fans but for less immersed readers I recommend re-watching the movies and reading the first book before embarking on this voyage in case the hyper drive fails. 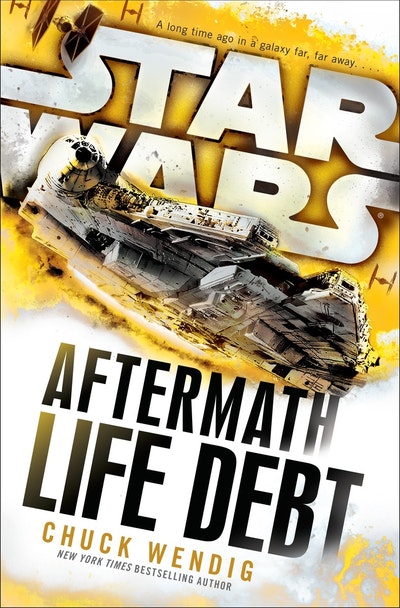