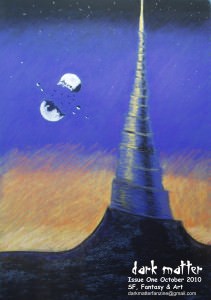 Here is my letter of comment for Dark Matter, issue 1.

It was a good read. I liked the front cover. It was interesting to read what is happening on the various TV shows. It was good to read the convention reports, as well as see the photos of AussieCon 4. It was good to get more than one perspective of AussieCon 4.
I’ve seen Nausicaa of the Valley of the Wind. I really enjoyed it too. I like most of the stories from Studio Ghibli. Others that I have enjoyed have been Laputa Castle in the Sky, Porco Rosso, Kiki’s Delivery Service, Princess Monoke, Spirited Away, Howl’s Moving Castle.

The book reviews, computer game review, movie reviews, were interesting to read. It was nice at the end of a book review that examples were given of what it was similar to other books and authors.

I knew about road rage but not about net rage.

I haven’t seen Porco Rosso but I’ve watched the other anime you mentioned. I loved them all except Spirited Away, which is ironic because that is supposed to be the one everyone likes.

I coined the term net rage after experiencing it at the pointy end, and reading Hamlet’s Blackberry. If anyone doubts that net rage exists, they should spend time on forums or play MMORPGs. My son learnt to deal with flamers when in middle school, which I consider to be both a good and a bad thing – bad that he had those experiences, but good that he has learnt to be assertive.