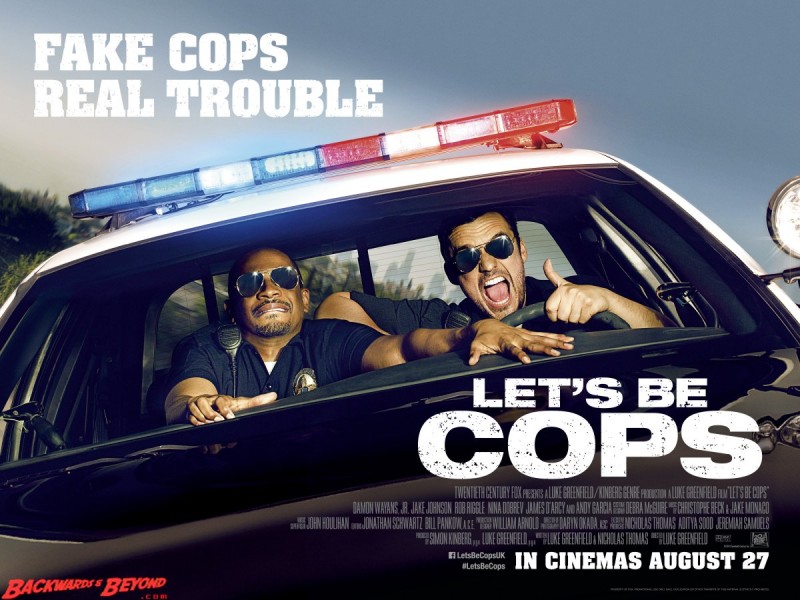 Ryan (Johnson) is a has-been football player, injured in his prime and loafing through life since. Justin (Wayans) is a video game developer who is not taken seriously and treated like the office schlepper.

At a college reunion they mistake ‘masquerade’ for ‘costume’ and arrive in police uniforms. While the reunion is a bust, only highlighting their unhappiness with their lives, they realise that members of the public are mistaking them for real police officers.

They end up playing the role to the point of buying a used police car and watching instructional YouTube videos. However, the longer they play cops and robbers, the more trouble they find themselves in both with the cops and the robbers.

Let’s Be Cops is (allegedly) a comedy movie. In 104 minutes, I laughed twice. Now, to be honest with you, dear reader, the two times I did laugh were at testicle humour. So my standards were not exactly Everest, yet the film still failed to consistently tickle my funny bone.

The plot was predictable and uninteresting. Even down to the (SPOILER ALERT) fact that one of the men becomes a real cop by the film’s end. (END SPOILER)

Wayans had moments throughout the film where his comedy chops showed. Unfortunately, Dobrev and Johnson were two-dimensional delivering performances that were flatter than last week’s cola.

The action scenes were neither funny nor thrilling, defeating the purpose of action scenes in comedies and action movies alike. The climax of the film was not only predictable but it was poorly executed. What could have been a fun and satirical take on the buddy-cop movie ending just felt drawn out and stupid for stupidity’s sake.

Let’s Be Cops took something that could have been an interesting twist on the buddy-cop comedy and turned out an uninteresting and bland snooze-fest. Unless you really love sophomoric comedies with few laughs, I would recommend giving Let’s Be Cops a miss. Want people who shouldn’t be cops doing it anyway in a comedy? Watch 21 Jump Street (2012) instead.