Elizabeth Zott is a chemist determined to research abiogenesis, the chemistry version of researching the big bang. However, as a woman in the 1950s, she faces insurmountable hurdles. Society’s lessons in chemistry included her rape (backstory only) then expulsion from a PhD program in retaliation for complaining about the rapist.

Short one PhD, she was hired on a ridiculously low salary at Hastings research center where she provided her expertise to men who didn’t give her credit. They also expected her to make their coffee, act as a lab technician instead of an equal, and generally treated her appallingly.

Little wonder that she fell in love with the one man who took her seriously, Calvin Evans.

However, Zott refused to marry him because she wanted to keep her name, pursue her work and gain credibility in the scientific community. Then it got complicated.

I try to read every novel with an open mind and yet once I’d absorbed the blurb for Lessons In Chemistry, I thought I knew how this story would go. Boy was I wrong. I don’t think I’ve ever been quite that far wrong with a literary predication before.

As Lessons In Chemistry progresses, Zott acquires a child called Mad, a dog called Six Thirty, and human friends Harriet and Walter. Garmus even tells some of the story from Six Thirty’s (third person) point of view. I love and adore all of these characters but Six Thirty is my absolute favorite.

I sat on the couch reading this novel with my new seeing eye dog Silkie beside me, all 25 kilos of her draped over my lap, or on the floor nearby. Although I’m not about to read War and Peace aloud to her, I have to say that Garmus pretty much nails my current faith in dogs’ intelligence. And I just LOVE Six Thirty’s character.

If real, Lessons In Chemistry would have progressed the feminist movement decades earlier and much faster. However, this is a fun novel, a laugh-out-loud exposé of the patriarchy. Relish it like a delicious sustaining meal, an expertly cooked barramundi from Humpty-doo perhaps. (The emphasis on expert, like one of ScoMo’s chef-prepared photo-op dishes, not one of the inedible-looking piles of slop he apparently dishes up himself.)

Lessons In Chemistry combines a surprising storyline with laugh-out-loud moments. And such a heart-felt heartwarming conclusion that, although foreshadowing built expectations of that particular event, I confess I had something in my eye. Both eyes. Largely because I love the characters so much. Lessons In Chemistry is the kind of novel one keeps to re-read when feeling down, whether feeling sick or merely sick of life. I plan to revisit Zott’s journey, her struggles, and her triumphs so this is one review book that will occupy a prominent place on my bookshelf.

Read Lessons in Chemistry if you enjoyed Rachel’s Holiday by Marian Keyes and Better Luck Next Time by Kate Hilton. 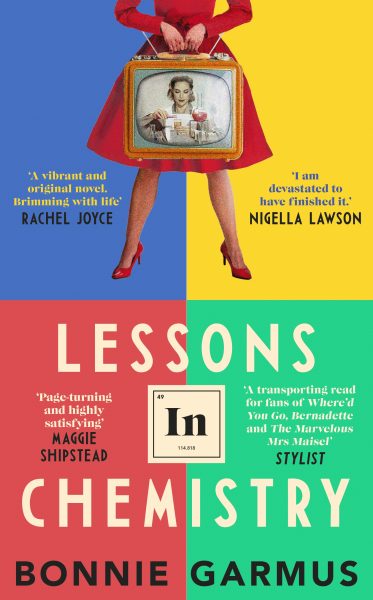