Susan Arkshaw moves to London to attend art school but arrives early, allowing her to spend the holidays looking for her father. Problem: she’s not even sure what his name is. Following the leads her extremely vague mother has given her over the years, she contacts an underworld boss. While she’s there, one of the left-handed booksellers of London appears and DEFLATES the underworld boss.

“Deflates” because he’s some kind of magical creature who’s been doing naughty things.

The left-handed bookseller, Merlin (not THAT Merlin) tells Susan to come with him if she wants to live. They escape together only to spend the rest of the night walking up and down an ancient path to keep a monster at bay.

And then things get really interesting.

The Left-handed Booksellers of London is set in the early 80s although it’s intentionally not historically accurate, with an alternate history affecting the “present”. Thus Nix justifiably avoids the use of mobile phones while injecting humor into the story. Some of his historical events and consequences are pretty damn funny.

Why do I love some books more than others? And why is The Left-handed Booksellers of London one of the books I love more? This is a question I’ve been asking myself lately because I’ve read some kick-ass books this year juxtaposed with some lukewarm reads. And one well-written book I just could not continue reading because I couldn’t deal with the content.

The Left-handed Booksellers of London has a good-sized cast of diverse characters, with an engaging protagonist team. Merlin’s gender is fluid although at present he’s male even if/when wearing women’s clothing. His sister wears men’s clothing and recently became a right-handed bookseller. Dominant hands identify certain likely traits and skills.

Susan is not a “chosen one” although at times I feared Nix wandered close to that trope. Her absent father and search for identity are, in many ways, relatable. I like to think that, in the coming books, Susan builds a “family by choice”.

None of the central characters are disabled but at least one minor character is in a wheelchair. This woman is a powerful magic user accorded respect by her bookselling family.

Nix writes a kick-ass plot enmeshing action with character and relationship development, sprinkling humor over the tension. And sprinkling sexual tension over the bad-guys-threatening-the-world tension. Susan gets a crash course in the magical world about which she knew nothing, bringing the reader with her.

And unlike stories like Hanna the TV series, characters don’t pivot, shedding their personalities just “because plot”! (I may get on my soapbox about Hanna soon. Watch this space.)

Nix uses familiar tropes like books bringing fantasy characters to life. However, this is setting the scene, possibly foreshadowing future stories, and has little to do with this actual story.

It’s pretty damn funny that the booksellers have A WHOLE FLOOR DEDICATED TO PENGUIN BOOKS and yet this story is published by Allen & Unwin in Australia!

The Left-handed Booksellers of London is an action-adventure with comedic and romantic overtones flavoring a magical-action-packed plot. Although Susan is 18, usually indicating a specific market for a story, I believe this book will be loved by middle schoolers to adults of all ages. I hope this is the first in a series.

If you grew up reading Garth Nix and Sean Williams’s children’s books, this is for you! 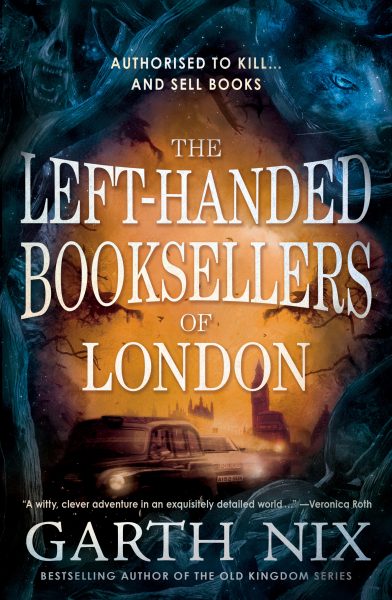