A woman is the last person alive. The Last One At the Party. She goes on a drug-and-alcohol binge for a month then, after the electricity grid fails, she wanders down to the BBC broadcasting station to broadcast a call for help. Because everyone will be watching the TV with no electricity. After that, she frees a handful of animals, keeps one, and leaves the rest. Desperately seeking someone, she drives around Britain.

I started reading Last One At the Party not really knowing what to expect but, by page 4, it sounded suspiciously like an apocalyptic comedy. The line “The American government acted swiftly and decisively to stop the crisis. No one wanted to make any of the mistakes that happened in 2020” elicited an audible laugh. That was the only time I laughed. If we were post-pandemic then Last One At The Party might appeal to me more.

I watched the first episode or two of the Last Man On Earth but it didn’t appeal to me at all. Others found it hilarious. A supportive audience enabled 4 seasons (2015 to 2018, noticeably concluded BEFORE Covid19). So I figure the striking similarities between the two stories place this book in the “not for me” pile.

However, I canNOT enjoy people trashing stuff just because they can. I’d always be thinking of the future, of possibly needing it later. Or, in the event of the end of the world, even the possibility of an alien race visiting Earth for an archeological dig would stay my hand.

Last One At The Party is Empty World (1977) written for an older (adult instead of adolescent) audience 40 years later. Where it’s original is where it fails. But then I’m the person who is so caught up in BUT THAT’S NOT HOW THE ELECTRICITY GRID WORKS that I can’t see any jokes.

I admit that reading Empty World as a 10-year-old freaked me out so much I’ve never forgotten the basic plot, including the suicide and the end. During Covid19 was not the best time to read a reboot of that story. Not far in, I seriously considered dropping it and moving on. I wish I had. However, with the new Feline Overlords offering moral support and light entertainment, I pressed ahead.

Well before Empty World, pandemic fiction was an established genre in books and on television. Zeitgeist fears of governments’ research escaping laboratories to wipe out humanity date back to at least the middle of the Cold War. Add to that Children of Men’s alternative take on the end of humanity and you’ve pretty much nailed the plot.

I am prepared to bet actual money that the author’s research consisted of watching old movies and not actually researching things like WHAT HAPPENS WHEN THE POWER GRID IS NOT STAFFED. AND FAILS.

There are SO MANY world-building and plot point problems with this novel that I’m not going to try to list them. Let’s just say that NO ONE INTENTIONALLY EATS FISH BONES. And does the author not see the problem with a fridge running on ONE HOUR OF ELECTRICITY A DAY? And [REDACTED BECAUSE CLIMAX/DENOUMENT SPOILER] IS NOT HOW THAT MEDICAL SITUATION WORKS.

How does a woman manage to learn to sail, know how to jury-rig a net to catch fish but doesn’t know anything about cooking said fish? She learnt to drive a couple of years ago (because plot), but can barely drive, does not have a car, but suddenly has a history of enjoying driving long distances?

And how does said woman grow up camping in tents with her parents but not be able to light a fire, be clueless about safety, not know how to make damper or something similar…

Not know that LONG LIFE MILK is a thing…

I would have accepted weevils in the flour (after an appropriate period) but a starving woman who’s too picky to eat stale crisps?! FYI if you’re hungry enough, you’ll cook said weevil-ridden flour or other foodstuff and thank Dog for the extra protein.

When I studied writing, I learnt about the “pat the dog” moment. It’s a moment about 20 minutes in to the movie where the central character will stop and pat a dog or do something equally sympathetic to show the audience “this character is nice, you can like this person” even if they have difficulties with other people.

Seriously, she could have rescued animals LOADS of times or at least released them from their homes. But no. She walks away again and again, leaving dogs howling in distress, the zoo in uproar… then indulges in a pity party because “it’s all too hard”. THIS WAS HORRENDOUS. In my opinion this was probably the most stressful, gut-churning aspect of the novel.

When she finally does rescue a few, she only extends herself to about half a dozen then stops because “it’s too hard”. Poor dear. Perhaps if she freed them in the first few weeks after the pandemic wiped everyone out instead of walking past distressed animals and going inside to take drugs to block out the sound.

Pet owners knew they were going to die all left their animals locked inside their homes. Some thought to leave all the pet food out and bowls of water but no one left a door or window open. Sigh.

Then – get this – she finally keeps one of the dogs. She picks a dog that should have died due to its previous privations and her “tender ministrations”. Instead, the dog saves her life again and again. Because plot. And, presumably, to engender sympathy for the woman.

Last One At The Party begins with the woman being the last person alive then flashes back to various periods of the woman’s life to build a picture of her childhood, her character, her codependency, her marriage, her mental health etc.

These flashbacks kept me reading in the hope of some kind of hero’s journey where the woman grows the fuck up. To be fair, she becomes more self-sufficient towards the end but it’s one of those “telling” bits after all the “showing” of the incompetence.

And then. The End.

Early on, when I was debating whether to continue reading, I flipped to the end to see how many pages. I saw a change in font, a heading, and guessed at a particular outcome. That outcome was one of the reasons I kept going.

Apart from the fact that a pandemic rages, we read as the woman loses her husband then  Everybody’s Dead Dave. Last One At The Party has representation of mental health and addiction issues in a few characters.

It could be argued that the central character presents nuanced representation, learns and grows. However, the other person with mental health issues was 100% awful. And when we learn the backstory, it becomes more awful. I think it was supposed to be funny but I felt like crying. And raging because FUCK THAT REPRESENTATION OF DISABILITY.

Representation of addiction issues and the gay character were much better but he’s dead at the beginning of the story, only showing up in flashbacks. Pretty sure that’s a trope.

Everyone knew there’d be a wave of pandemic fiction after the advent of Covid19. It is inevitable. Last One At The Party is the first actual pandemic fiction I’ve read so far, although Kathy Lette’s Husband Replacement Therapy mentioned the pandemic briefly at the end.

In this novel, the pandemic is NOT Covid19, it’s 6DM (six days maximum, named for life expectancy after symptoms appear). It’s the pandemic AFTER the current pandemic. Which, in many ways, makes this WORSE. Especially as it’s set in 2023. Scientists warned us that a pandemic was coming. Now they’re warning us that more pandemics will ensue because of climate change and environmental vandalism etc. So, setting this novel in 2023 and 2024 with another, worse, pandemic causes my adrenaline response to skyrocket, my heart to race, my hands to shake.

Covid aint over ’till the world sings

I suspect Marketing thought that Covid would be or is about to be “over” because vaccinations have begun in some countries. (Not in Australia, which was wiped out very quickly in this novel.) Marketing hasn’t taken into account that Covid19 variants are taking off with increased virulence and higher death tolls. I think those timing this release assumed that “we’ll be able to laugh about this when it’s over”. But it isn’t over. Not by a long shot.

And the Australian government is so determined to fuck over the country that they’re telling us we’ll have to learn to live with Covid19 long-term. Which is consistent with their stance that no Asylum Seeker would be vaccinated, a position they only recently announced would be reversed. (And if you believe half the Australian government’s announcements, I have a lovely bridge to sell you situated in a world-renown harbor… I can throw in a gorgeous opera house to sweeten the deal…)

So Covid19 isn’t over as a pandemic. Not by half. Thus, reading Last One At The Party is emotionally taxing. It is NOT escapist reading. Not by a long shot.

Last One At The Party is Empty World written for adults with tropes ripped from Children of Men (end of humanity, suicide pills), Clueless (the central character who drove me NUTS), The Birds (seagulls that are suddenly as big as dogs and very very hungry) and every pandemic movie ever. The author appears to consciously be writing a Last Man On Earth novel but with a woman lead.

Read it if you love pandemic and apocalyptic fiction.

Read Last One At The Party if you enjoy light “fashion” fiction crossed with horror.

Don’t read if you’ve been having vivid dreams like a lot of people were reporting around Easter 2020. Do NOT read it if Covid19 has given you nightmares or detrimentally impacted your mental health.

For science-based fiction, I highly recommend Octavia Cade’s fiction and her recommendations. If you want fun fiction that includes a pandemic, read Hollowpox by Jessica Townsend. Sure, it’s kids’ fiction but I really enjoyed it (even if representation of disability needs improvement.) 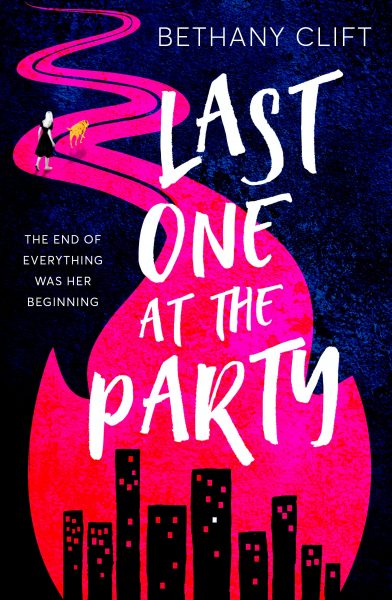