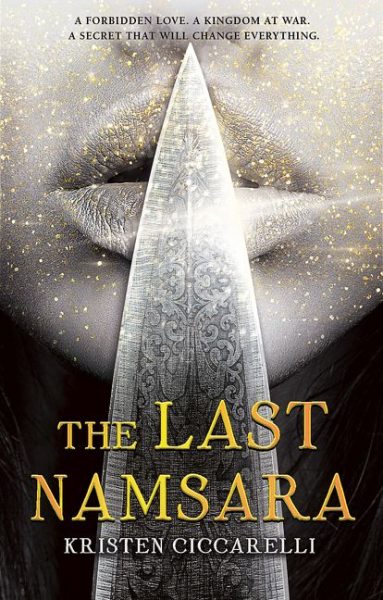 I read this book a while ago but forgot to write the review. I picked it up today to read it then the story seemed too familiar… flipping through pages, a feeling of déjà vu crept over me. The Last Namsara is a Middle Eastern style fantasy story with two young adult siblings who rebel against their wicked father-king to liberate the land. There is romance — not between the siblings, thank God — and dragons. Never forget the dragons. The problem with this novel is that there are so many similar books out at the moment.

Asha is the Iskar, a girl who told a story to a dragon, giving it power. She was then burnt, badly.

Mottled skin, pocked and discolored. It started at the top of her forehead, moving down her right cheek. It cut off the end of her eyebrow and took a chunk out of her hairline. It stretched over her ear, which never recovered its original shape and was now a deformed collection of bumps. The scar took up one-third of her face, half her neck and continued down the right side of her body… Asha wore her scar like a crown (p. 22).

However, the last bit — about wearing her scars like a crown — is not accurate. Townsfolk reviled and spat upon Asha, blaming her for the dragon attack that ended with the dragon burning her. People hate her and most are not allowed to touch her on pain of imprisonment, whipping or worse. Her father has manipulated her, using the constant reminder of her scar and its origins, to motivate her to kill dragons. Asha has internalised beliefs that she is wicked, which wickedness is evident in the visible reminder of the scars.

Scarring as shorthand for corruption

The Last Namsara begins by reminding readers of the dominant discourse’s beliefs about scarring: that a scarred body reflects a scarred or warped psyche. This belief is so ingrained that film makers use visible scarring as shorthand for corruption.

As the story progresses, Asha learns the truth, makes a stand against her father’s wishes, and comes to a greater knowledge of self. And she discovers that someone has seen who she is all along, despite the scarring.

Why this review is late

I suspect the reason I didn’t write my review back in 2017 was twofold. Firstly, some consider facial scarring a type of disability in that it causes barriers. The powers that be at the University of Canberra were simultaneously applauding my academic excellence (I have an award to prove it) while obstructing progress in my research into representations of disability. They absolutely forbade progress into my research, insisting — repeatedly — that I only write my research proposal. My supervisor refused supervision for 8 MONTHS after my Introductory Seminar, which she insisted held behind closed doors instead of open to the public as was normal practice. Suspicious much?

I wasn’t happy at the time but hindsight says they may have planned to expel me instead of support my studies but they were going to get ALL of the government funding for my scholarship before they expelled me. This required dragging it out and playing games — psychological and physical abuse — for another 16 months.

The second reason I didn’t write the review at the time was that I had surgery to remove an 8cm cyst in 2017. I was in incredible pain for years, intolerable pain for several months, opiates to cope… my brain was mush. Furthering my research was all I had capacity for at that time. I couldn’t do much else. So, my apologies.

The Last Namsara and race

Kristen Ciccarelli uses a middle ages Middle Eastern type setting while being a white Brit (person from Great Britain). Although her world building is good, I think white authors should take great care to not misappropriate others’ cultures and to never ever exoticise other people or their cultures. As someone once said, white people have knights in their own history; why do they insist on misappropriating samurai and ninjas?

If you’re going to write another’s culture, the least you can do is ensure you’ve done your research. For example,  listen to this podcast interview where Suzy Zail describes the research and consultation she did when writing The Last Namsara. It’s evident that Ciccarelli did not do this level of research nor, I suspect, did she do much historical research while appropriating Middle Eastern culture for this fantasy story. Had she done so, The Last Namsara would have had more depth, more richness… We would have felt the desert winds, the fear of dehydration. We’d have understood what it is to hunt for precious herbs. And we’d have a greater understanding that ‘desert’ is not necessarily rolling sand dunes. Alternatively, if a desert consists of rolling sand dunes, Namsara would have revealed how treacherous they are.

The Last Namsara is a fun young adult fantasy story with good exploration of issues surrounding facial scarring and prejudice. Ciccarelli could have improved the culture and world building by relocating to a fantasy version of her own culture’s roots or if she’d done more research. It has romance, swords and dragons with a satisfying hiatus between the end of this novel and the beginning of book two. Unfortunately there is a glut of this type of book at the moment, and some of the other trilogies are written by #OwnVoices authors, so I’m giving The Last Namsara 3 stars.