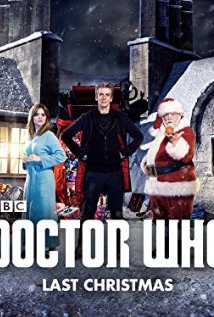 Santa Claus (Nick Frost) crashes on Clara’s roof. When she emerges from her rooftop door, she discovers Santa berating his elves, Ian and Wolf. The Doctor (Peter Capaldi) arrives, tells Clara to get into the TARDIS and they leave.

Next they arrive at the North Pole scientific station where a young woman is sent to walk through an infirmary with 3 sheet-covered figures whom she must not look at or think about. When the Doctor and Clara walk in from the opposite door, the figures rise from their beds and facehuggers descend from the ceiling.

There are supposed to be 4 figures in beds but one of the beds is noticeably empty; I waited for the not-so-inevitable surprise attack. Not-so-inevitable because it never comes. Maybe the 4th figure is invisible at this stage?

What ensues is a jumble of kiddie Christmas movies, Alien, Inception and various Steven Moffat stories including “Shut up” when no-one is speaking, writing on blackboards and references to the previous season finale.

There are snippets of humor and fun character work — those elves and Santa have unrealized potential — and Christmas-themed sweetness for the kiddies. My favorite scene is the opening on the roof, full of promise. I saw the reindeer playing in the sky with the elves calling them like owners calling playing dogs to heel then I moved from my ‘work space’ to the lounge room to enjoy the SFX more fully. Then I saw ‘facehuggers’ with slits that, for no apparent reason, opened to reveal human faces underneath. I guess Moffat couldn’t trust his audience to realise that facehuggers were, y’know, hugging people’s faces. Overall ‘Last Christmas’ made no sense for which Moffat’s excuse is “It was a dream.”

The ‘Behind the Scenes’ feature shows excerpts for the episode juxtaposed with Moffat and cast members chatting about the show. These features are never as interesting as the former Doctor Who Confidential that used to show SFX development and challenges that were overcome. However, this feature touches briefly on Michael Troughton, Patrick Troughton’s (the 2nd Doctor’s) son as cast member and childhood visitor to the Doctor Who set and Dan Starky (who plays Strax and an elf). Steven Moffat talks to the camera about his love for his story ideas, his casting and his script. Moffat also declares he’s established next season’s story arc and a few scripts have already been written.

Overall, ‘Last Christmas‘ is a mild-horror-themed Christmas episode for families as long as the kiddies aren’t susceptible to nightmares.