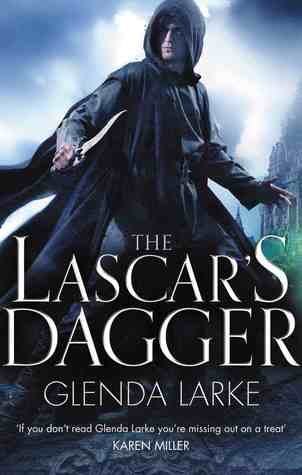 Lascar’s Dagger opens with Ardhi racing to prevent a catastrophe but arriving too late; his raja is dead. Because the raja’s death is Ardhi’s fault, he’s charged with a quest to rescue the religious artifacts for which the raja was killed. At only 18, Ardhi sets out to the other side of the world, knowing neither language nor customs, looking very different from the inhabitants of the countries in which he seeks his prize.

Saker is a cleric and a spy for the Pontifect, the leader of the religious community. Saker meets Ardhi when spying on Kesleer’s warehouse, accidentally overhearing a conversation that becomes more significant in retrospect.

Ardhi’s kris, an ornate dagger, comes into Saker’s possession in the warehouse before the two escape, going their separate ways.

Trapped in a loveless marriage, Sorrel Redwing endures abuse after the death of Heather, her daughter, only to discover her husband murdered Heather because she was deaf. In fear of her own life, Sorrel pushes her husband to his death – falling down stairs – the same way he murdered Heather. Sorrel flees, finding sanctuary in a shrine whose invisible guardian protects her, giving her a witchery: the ability to magically disguise herself. Princess Mathilda witnesses Sorrel’s gifting and, being the spoilt princess she is, she bullies Sorrel into servitude.

If Lascar’s Dagger was a movie it would pass the Bechdel Test, especially as Mathilda tries to take control of her own life, railing against the strictures binding women in state politics. In sharp contrast, the Pontifect is a dynamic, powerful woman who has risen to the head of the dominant religious order. Sorrel Redwing also spreads her wings, finding a new path as she develops.

International politics, forced marriage, religious practices, an unseen evil and a plague become threads woven into a complex plot in the fabulous fantasy world of Lascar’s Dagger. This is the first time I’ve read any of Glenda Larke’s work; Lascar’s Dagger proves Larke lives up to her reputation as a must-read fantasy author. Highly recommended.