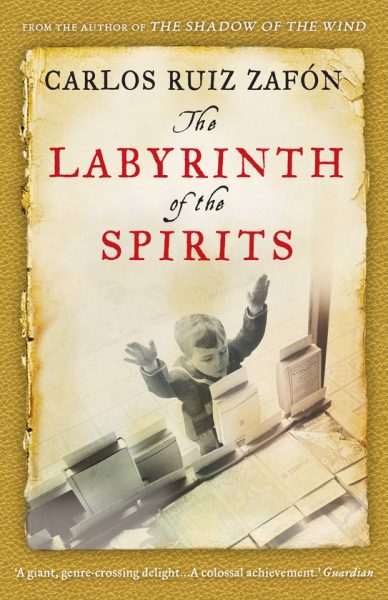 I recently decided to delve into the 833 pager that is The Labyrinth of the Spirits.  Carlos Ruiz Zafon’s previous three Cemetery of Forgotten Books set high expectations. I expected suspense, heart palpitations and mystery. Guess what? I was not disappointed. Those who enjoyed Shadow of the Wind will love this novel. If you are new to the series, I envy the first-time reading experience you will have.

This is the fourth and final book in the series. We revisit familiar themes and characters but this time we meet the alluring and unforgettable protagonist Alicia Gris. Fierce and courageous, Alicia is a heroine who has to take risks and many dark paths whilst the reader holds their breath and hopes for her success and, ultimately, her survival.

The heroine of the story

Written largely in the third person from Alicia’s viewpoint, this novel follows the heroine working as a member of the Spanish secret police. Already disenchanted at 29 with the darker demands of her work, Alicia reluctantly agrees to investigate one final case for her boss in exchange for her freedom. She must investigate the disappearance of Spain’s Minister of Culture, Mauricio Valls (a returning character). Early in her investigation she discovers a copy of a rare book hidden in Valls’ desk, which starts her down a twisting path that leads her to Barcelona. This path eventually reveals connections between Valls’ mysterious disappearance and a series of atrocities committed years earlier during the corrupt Franco regime. At the same time, Alicia must confront her own complicated past, which includes a return to the Cemetery of Forgotten Books.

Thanks to Zafon’s expressive writing and his enigmatic characters, Labyrinth of Spirits is addictive and engaging. Alicia Gris is a remarkable character and one I continued to think about well after I finished the book. She is cunning, calculating and bold, yet also vulnerable, damaged and isolated. The reader is drawn into the dark underworld of gothic Barcelona where things happen that will chill your blood.

I love that this book can be read as a stand-alone without the other books in the series yet still be completely understood and enjoyed. Having said that, knowing the first three books did add to my overall experience of reading Labyrinth of the Spirits. The novel varies in pace, at times fast and suspenseful but, at other times, unravels at leisure. Despite its length, I devoured this novel.

Labyrinth of Spirits is gripping. It is a novel that leaves you lost when you get to the end of the final page because you don’t want the drama and mystery to end. Four and a half out of five stars.

Other books you will enjoy if you liked this one of course include the others in the Cemetery of Forgotten Books series: The Shadow of the Wind, The Angel’s Game and The Prisoner of Heaven. Also, All This I Will Give to You by Dolores Redondo and Once Upon A River by Diane Setterfield.

Emma Streeton is self-confessed bookaholic who loves nothing more than losing herself in good fiction. If she had her way she would retire tomorrow to begin the important task of getting through her constantly added to book bucket list. She lives in Canberra with her two bookworms and a hubby. When she hasn’t got her head in a book, Emma loves being outdoors, keeping fit and hanging out with family and friends.