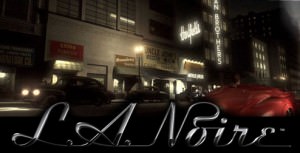 The highly anticipated murder mystery game set in a “perfectly recreated” Los Angeles of 1947 will hit shelves on the Xbox 360 and PS3 on May 20 2011. Developed in a joint partnership between an Australian based studio, Team Bondi, and the ever famous Rockstar games (Grand Theft Auto, Red Dead Redemption), L.A. Noire seems to be pushing current boundaries of video games as a story-telling medium.

L A Noire  will follow the story of a detective trying to solve a series of murders. What makes this game fresh and exciting is the unparalleled player interaction and openendedness with regards to characters associated with the mystery. Team Bondi developed brand-new motion capture technology for the production of the game, whereby real actors deliver their lines, with all their mannerisms, expressions and facial nuances captured and imported onto characters within the game. This allows the player to ‘read’ the actions of characters during conversations. If the player suspects a character of lying to you based on an expression, a nervous twitch or some form of ‘tell’, they can follow different dialogue options. The case may progress in a different direction if the player gains additional information or comes to certain conclusions.