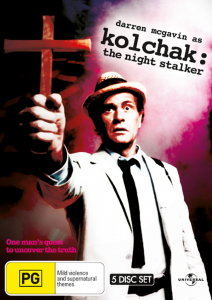 Big thanks to Madman Entertainment for submitting Kolchak: Night Stalker for review!

I swear it was fate that brought Kolchak and myself together.

I was at my favourite bookshop one day and caught sight of a particular book in the graphic novel section: funnily enough it was an adaptation of Kolchak! I asked my knowledgeable husband, “ what in the world is a Kolchak?” and his answer is too long to fit in this review, but needless to say ended in my fascination with a TV series I might enjoy.  Imagine my delight when the box set of the television series lands on my door for reviewing thanks to the generosity of Madman Entertainment!

Kolchak: The Night Stalker is a twenty episode dark comedy/suspense/supernatural thriller/crime show that began with two telemovies (which I plan to get a hold of and watch) called The Night Stalker and The Night Strangler made in 1971 and 1972, the television series running in 1974 to 1975.

Carl Kolchak is a seedy, but incredibly passionate and resourceful, reporter who works for Chicago newspaper , INS (Independent News Service). He is always on the lookout for a killer story and seems to find one, although the killer tends to be inhuman or supernatural.  Vampires, werewolves, the Bogeyman, zombies, headless spirits and various other assorted creatures from various mythologies get a look in, and Kolchak faces rather boldly, sometimes without common sense in tow, but often discovers the mystery, the solution and saves lives, and gets a cracker of a story, usually to find he can’t get it published as it’s just too strange! (or a security threat, or controversial).

Kolchak is played brilliantly by Darren McGavin, and you find yourself liking the character immensely. There is something infectious about his willpower, stubbornness, regard for the entity he is facing and despite his ultimately self advancing reasons behind his pursuit of said oddity, selflessly ends up avoiding more deaths, intentionally or not.  The rest of the cast are excellent too, including his long suffering boss, Vincenzo (Simon Oakland), his colleague Updyke (Jack Grinnage) and the charming and tough Miss Emily (Ruth McDevitt). Even some popular actors from various other popular series make guest appearences, including a certain cross dresser from M.A.S.H!

The show is more of a dark comedy involving strange crimes and criminals than serious drama or horror. Although having said that the show often ends with a little nugget of wisdom from Kolchak regarding what each encounter he has with the bizarre has taught him about humanity and the world.

The effects obviously are not like the standards of today, but are effective in telling the stories, and frankly I like the surreal touch they provide via their imperfection.  The writing is also quite good for the era and also considering the running time of each episode (approx. 1 hour), they have to cram a lot in, and move the story along with too much description. The quips, especially between Kolchak, Vincenzo and Updyke are fun to listen to.

I was also happy to see the sexism and racism that could be typical of seventies shows missing from Kolchak. There seems to be respect for the cultures whose mythology they borrow from and quite a few of the female roles involve women who fool Kolchak everytime he encounters them, he needs to get information/or just plain get out of trouble and don’t fall for his lies/tomfoolery. The wit and craftiness of these women that feature in each episode are very entertaining!

It has been considered the forerunner to the X Files, but I really don’t think you can make a comparison between the two.  Having said that I think fans of the X Files, Twilight Zone and Outer Limits would enjoy Kolchak for similar reasons.

I am a huge fan of Kolchak: The Night Stalker and think anyone interested in shows that deal with the macabre and weird with a sense of humour/wit, intelligence, respect for the myths, a touch of reflection on world issues,  tacky effects and with characters you will become very fond of , will become huge fans too!