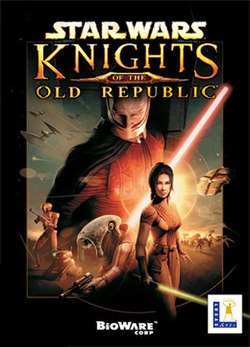 Set 4000 years before the events of Star Wars episode I, Knights of the Old Republic (KotOR) takes place in a time where the Sith are terrorising the galaxy and extending their rule. Created by BioWare (developer of the ‘infinity’ engine, Mass Effect, Jade Empire and Dragon Age), KotOR puts you in control of a character who crash lands on a Sith Controlled planet – tasked with exploring vast worlds and following an immersive storyline.

The game, created in 2003 was hailed as being far ahead of its time, and provides a rich, compelling storyline and gameplay experience today. Filled with developing characters, a simple but fluid combat system, and an engrossing and cinematic storyline unfolding seamlessly, KotOR defies the common formula of releasing rebranded generic B-grade gaming experience under Star Wars names, and engrosses you in a daringly dark story, fresh from what we know about the movies and it makes you care. Through the intricate story and gameplay, KotOR makes the player care about the Sith, the Jedi, the citizens of Taris, and the “Star Forge”.

KotOR begins with a relatively linear gameplay experience but branches out into a fairly open RPG experience once the player reaches a certain stage in the game. The worlds you explore are full of optional side quests allowing the player to experience further gritty lore. There are multiple ways to complete many quests, however the main storyline is fairly linear all the way through.

The storyline is really the high point of the game. The combat and gameplay itself is used only as a medium for communicating Bioware’s story, a really welcome change from the average modern games which include storylines as an afterthought. The plot twists and turns at many points, with the main twist awarded 2nd place in Game Informer’s top ten video game plot twists of all time.

While Bioware worked on the game and story itself, LucasArts developed the audio aspect. With over 15000 lines of spoken voice-over, KotOR boasts the most dialogue in any game from its’ time. LucasArts hired award winning composer Jeremy Soule to compose the games score. Flawless sound effects and music set the scene and add a layer of immersion to the worlds of the Old Republic.

If you haven’t already, you should definately play this game. One of the pinnacles of western RPG making, 2003’s game of the year, and one of the greatest games of all time.