This zode starts with trial by combat where one of the participants is kissed by fire: he sets his sword alight because that’s so helpful in combat.

There’s nothing quite like ‘might is right’, which is why this zode starts with a battle between the leader of the Brotherhood of the Unbannered, Thoros of Myr, and Sandor (the Hound) Clegane to test the Clegane’s guilt. Thoros fights with pyrotechnics: he slices his hand along his blade. The blade bursts into flame.

As they fight, Clegane catches on fire. I guess he’s kissed by fire.

In the books these pretty pyrotechnics resulted in brittle blades; I thought it was for display after not during a battle. A  brittle blade is not something you want when you’re fighting for your life. But then, this dude doesn’t have any fear of death.

Aaaand we’re back with Jon Snow and the Men of the North.

What’s a girl got to do to get laid around here? Ygritte works really hard to get Jon in the sack.

As usual we see girlie bits — butt then boobs — while Jon is fully garbed. Jon goes down on her. He gives oral and she’s intrigued, she asks about it. She mocks him for being a good lover, implying it’s not manly although she enjoyed it. Jon makes the classic mistake of asking about her previous lovers. When she starts listing them he gets all coughy and in a rush to get back.

A little of Jon’s chest and a blink-and-you-miss it view of his butt is all we get. Game of Thrones is trying to be more equitable in its gaze but they haven’t managed it yet. Not that I think the dangly bits are attractive to look at but it’s about equity not being all about the straight male gaze. I realise we live in a patriarchal society but when are the guys in charge going to realise that, between women and gay guys, the straight white male gaze is NOT a majority view?

Ygritte says she is kissed by fire because she’s a ranga (red hair).

Jaime nearly faints like a Regency damsel in distress. After Brienne has words with Jaime he seems to be ‘manning up’ but I prefer the misattributed Betty White quote about vaginas being the really tough anatomy, unlike men’s genitalia. Perhaps Jaime is womanning up?

He refuses ‘milk of the poppy’ while the surgeon cuts away rotting flesh around his wrist. That’s just machismo bullshit. It would have been worse that the torture to which Ramsey Snow has subjected Theon Greyjoy — so far.

Oleanna Tyrell takes Tyrion Lannister in hand while he tackles the cost of the royal wedding. She likens the wedding to bread and circuses without actually referring to Rome. The thought of pandering to the masses instead of being torn apart by them rattles Tyrion. Once Oleanna has established her supremacy then Oleanna compromises with Tyrion. Diana Rigg steals the scene AGAIN in spite of being matched with the awesome Peter Dinklage.

Gendry tells Arya he’s staying with the Brotherhood. Arya is nearly in tears while Gendry tells her about his life of service. It’s an adorable conversation on both sides. I just want to hug them both and tell them it’ll all be okay — but this is GRRM’s story, so it won’t be okay.

Rob Stark’s men lecture him on the difference between murder and vengeance after 5 men broke into the cells and murdered 2 unarmed teenage boys. Because they’re manly men and those boys hadn’t killed anyone, making homicide justifiable vengeance.

Once men kill people on the battlefield it must be easier to murder them in their cells. Game of Thrones is a soapy and yet I wonder how many incidents in this story relate to the historical One Hundred Years War, upon which George R R Martin based his series.

Stannis Baratheon visits his wife, Selyse, so we can see her bottled babies that died before coming to term. Selyse doesn’t want Stannis to see their daughter Shireen but then submits, citing rank. She might as well say ‘You’re a man so you’re my lord and master… And I’m a basket case.’ Between Selyse Baratheon, insane woman in the Eyrie (we should be getting back to her soon, blegh) and Cersei tumbling down the rabbit hole of stupidity, there are too many women in Game of Thrones who are nuts. The men tend to be stronger, none even appearing like Hamlet ranting about ghosts and tablets.

Shireen Baratheon was pleased to see her father. She has dragon scales on her face, presumably from being born and raised on Dragonstone. Her ‘disfigurement’ raises interesting questions; I’d love to see her turn into a dragon or walk through Melisandre’s fire to exact retribution against the Red Woman. I can live in hope: it hasn’t happened by A Dance With Dragons.

Jaime disturbs Brienne’s bath and settles in her tub in spite of another being available. She’s not happy and he’s obnoxious. He provokes her until she stands up, revealing her butt to the camera. If I’d been in her shoes, or in her bath water, I would have exited upon his entrance. I’d object to Jaime sharing a bath with me: he’s still filthy. I’m surprised the water around him isn’t cloudy as it soaks off. He doesn’t even try to get clean.

He talks about the mad king’s obsession with fire. The king seemed to believe he was kissed by fire: in his case, he thought he was impervious to flame. Before his death, he ordered royal executions by flame.

As Jaime’s story unfolds, he transitions from kingkiller to the city’s saviour: the king had given orders to burn everyone. Jaime killed the king to save the city, so the pyromancer wouldn’t follow the mad king’s order. Jaime cries. It’s in this book and this season that Jaime becomes a somewhat likeable character, partially redeeming himself in spite of his incestuous codependent relationship with his twin sister.

Shireen is a precocious princess. She joins Arya in the likeable personality stakes although her life isn’t as much at risk as Arya’s. She takes a book to her Onion Knight when she learns he’s in the dungeon and, when he says he can’t read, she determines that she will teach him. He WILL learn. Because Princess instructs him.

Barristan Selmy and Jorah Mormont chat away about the good old days. In the books, Barristan’s identity was a surprise later but here they’re talking about ‘back in the day’. These conversations explain the situation and pending perils to viewers.

Rob Stark makes stupid decisions in spite of his advisors’ advice then, his crowning stupidity, he plans to seek assistance from the man whose daughter he should have married. Like that dude isn’t going to be pissed when Rob flaunts his new bride.

Loras Tyrell gets hot and heavy with another guy who flaunts his shapely gluteus. I hope Tyrell isn’t in love because his beau is a spy, spurring Littlefinger to talk to Sansa again, encouraging her to run away with him. Knowing Sansa’s future, especially the TV version, I wish she’d stood firm. She always irritated me in the novels: she’s a silly little chit, deserving the Regency epithet used with patronizing intent.

Cersei gloats while Tyrion realizes Tywin has decided Tyrion will marry Sansa. Then, as with Cinderella’s step-sisters, the ill-fitting shoe slips onto the other foot: Tywin casually informs both children that Cersei will marry Loras Tyrell. From unseemly gloating to outrage, Lena Headey conveys the full gamut of Cersei’s emotions convincingly. It’s worth a laugh.

The sexual gaze is more equitable in this episode although Brienne’s butt is gratuitous. Loras’s lover’s butt is shown as part of a seduction to uncover Tyrell plotting. And what a glorious butt it is.

Female characters are increasingly populating Game of Thrones, in varied roles, exploring more dimensions of femininity, it’s just a shame so many are not quite sane in comparison to the very few men depicted as mad. Rob Stark is intent on snatching defeat from the jaws of victory while Tywin Lannister looks set to achieve his goals — building a legacy — while alienating his children. Daenerys leads her Unsullied off into the desert before meeting Grey Worm, her army commander. The dragons fly overhead.

I want more of the dragons. I guess I’ll just have to watch the next episode of Game of Thrones. Really soon. 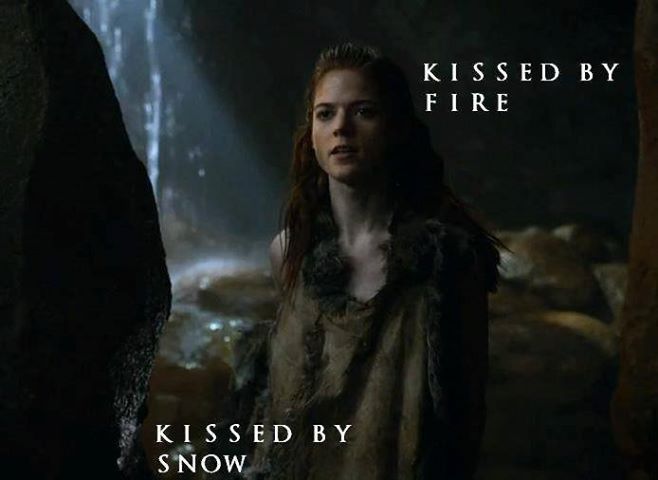