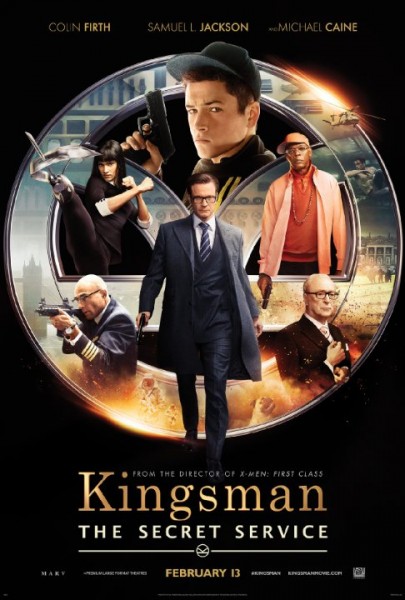 Eggsy (Egerton) lives with his mother, step-father and baby half-sister in a run-down flat. Eggsy’s step-father is an abusive and domineering thug.

When Eggsy is arrested for car theft, he is freed by Harry Hart AKA Galahad (Firth) and recruited to join an elite secret agency that operates at the highest level of discretion. Eggsy discovers that his biological father died in the service of the … Kingsmen? Kingsmans? Erm … the same secret agency.

While Eggsy competes for the recently vacated position of Lancelot (all the Kingsman members are named for Camelot’s round table members), Galahad uncovers a plot for the genocide of all but a selected group of humans.

Can the Kingsmen (Kingsmans?) defeat Richmond Valentine (Jackson) before his plans unfold or will all the kings horses and all the kings men fail to put the world back together again? (I am SO sorry. Kinda.)

[I’m torn between laughing and smacking you. — Editor]

You know how sometimes you can see a trailer for a movie and think ‘Wow! That looks funny!’ and then it is really not even remotely funny? *cough* Let’s Be Cops *cough*

Well, Kingsman: The Secret Service is NOT one of those movies. The humour is well-balanced with the plot and is consistent throughout the film. Never before have exploding heads been so funny is all I’m saying.

When I went to see Kingsman: The Secret Service, I had no idea it was based on a comic. However, upon watching I found the humour to be very similar to that found in the Marvel Cinematic Universe but with a British twist.

Colin Firth is smashing. Whether he plays a serious role or a comedy, Firth always impresses.

Taron Egerton is a new-comer to the world of film, but definitely someone to keep an eye on. In Kingsman The Secret Service he has proven he has comedy chops, action skills and the ability to portray a wide range of emotions.

‘I’m a Catholic whore, currently enjoying congress out of wedlock with my black Jewish boyfriend who works at a military abortion clinic. Hail Satan, and have a lovely afternoon madam.’