Isolde is princess of the House of Lara. Her father is about to surrender to the Blood King to save lives. The Blood King is a vampire and king of a vampire kingdom. Previously a king under threat from the Blood King planned to entrap and murder him. The King of Battle and Blood pre-empted the betrayal and killed everyone concerned. So when the Blood King demands Isolde’s hand in marriage as part of Lara’s surrender, she accepts to save her father and her people.

However, prior to this event, Isolde – a woman in her 20s with a healthy sexual appetite – took Killian, commander of her father’s guard, to her bed. Killian now feels entitled to her, her body and the kingship that accompanies marriage to a princess. Isolde is unimpressed.

Isolde naively believes her people will respect her sacrifice. Instead they brand her traitor. Traitor for enjoying sex with her new husband (her screams penetrated the walls), and traitor for not killing him. However, she tried to kill him, to stab him with a dagger. When she defended herself against accusations, the swift reply was pretty much “yes but how many times did you stab him?”

Then Isolde realizes she is a target as much as her husband.

Quite often these kinds of stories struggle to pass the Bechdel Test. However, King of Battle and Blood passes. Isolde has relationships with other women, like the woman who raised her in place of her dead mother. But also, in her new home, Isolde becomes friends with Ana Marie, cousin to her new husband, and acquires new ladies in waiting.

Also Ana Marie, another vampire, is in love with a human woman. So it’s very Alison Bechdel.

King of Battle and Blood repeatedly references Leigh Bardugo’s novels: The Ninth House vs Nine Houses; Rivka vs Revekka, and so on. I’m currently working my way through Bardugo’s Shadow and Bone series via audiobooks so I found the similar names distracting.

Where Bardugo’s novels incorporated some semblance of Russian culture and landscape into her fantasy world, St Clair doesn’t appear to do so. Referencing Bardugo’s novels so heavily is a huge compliment, and St Clair has done so without plagiarism, it’s somewhat distracting.

King of Battle and Blood (or go to New South Books in Australia) is part Green Darkness with a strong influence from Leigh Bardugo’s novels and more than a smidge of Nalini Singh’s novels. Politics, sex, betrayal and an old enemy keep this roller coaster speeding along. Publishers Weekly gave this novel a starred review, saying:

‘Outstanding…St. Clair has a masterful hand with the couple’s slow burn, balancing banter, contention, and highly charged moments. Readers will be chomping at the bit for the next installment.’ 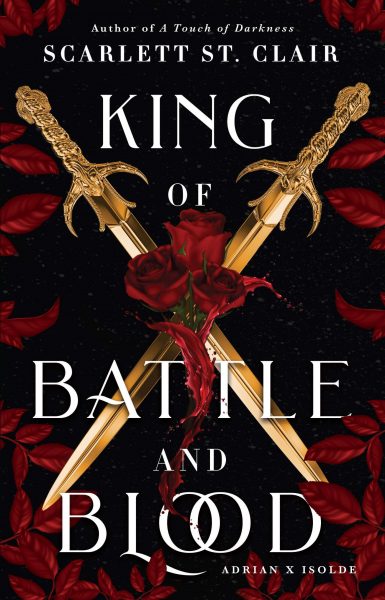