The minion was down with a virus last weekend so, in his manflu-pathology, he meeped about wanting Killjoys. ‘I wanted it for my birthday but it wasn’t released until a month after,’ he sighed. ‘If it had been released earlier, we could have got that instead of Sleepy Hollow.’

Killjoys was so. damn. good. that we watched the entire season over the next day.

In a far-future solar system, a ‘Quad’ (or quadrant) consists of a planet with a few moons and an asteroid system, much of which is inhabited, and all of which is run by The Company. The RAC — Reclamation Apprehension Coalition — are bounty hunters commonly known as Killjoys.

From this moment on, I loved this series.

Dutch pulls what should have been an impossible stunt on a couple of levels, saves the boy and takes down their mark, boss-goon.

Over the course of the season Dutch and Jaqobis accept a number of warrants and ‘get their guy’ but Killjoys doesn’t fall into episodic formulaic stupor. The umbrella story-arc — primarily Dutch’s history catching up with her — is part mystery and part thriller.

Even side characters like the adorable gay bartender, the masochistic monk working for the rebellion and the doctor have complicated backstories that add spice to the cookpot without distracting from the primary concern.

Meanwhile lots of people have sexytimes without the story slowing or becoming as icky or as male-gaze oriented as Game of Thrones. Killjoys is, after all, MA-rated and that is mostly for drugs and violence.

I want the soundtrack. Stat.

Many episodes have plot holes but the characters, the attitude, the sountrack and the excellent pacing patch over the dips in the road.

Some of the actors are ‘types’ like Hills Oonan (Frank Moore) who is obviously a Colonel Saul Tigh (Michael Hogan)–type. At other times, well-known actors like Amanda Tapping make a surprise appearance.

Michelle Loveretta created and wrote much of this series; she’s also the brains behind Lost Girl and it shows with the strong female lead and dynamic action; there’s less of a focus on sex in Killjoys but there’s no succubus to nourish either. Loveretta understands the genre and, I believe, loves the genre. While the writers of Dark Matter have the full flat-pack writers’ kit in front of them, their attempts to go through the motions left me flat, giving up on the series after 2 or 3 episodes even though I purchased a season. Killjoys, however, KILLJOYS I LOVE. Loveretta is the new Joss Whedon; she’s definitely a writer and creator to watch.

Killjoys is part Farscape: Dutch is the new Aeryn Sun. It’s part Babylon 5 and Firefly with a class-based struggle and social issues but especially Firefly for the world building. It’s part Blakes 7, especially when the team falls apart. It’s part Buffy for the soundtrack that is, at times, worked into the story. It’s partly Supernatural for the sexy brothers and their bromance. And, finally, it’s part Dark Angel both for the kick-ass female lead but also for what I expect from season 2. 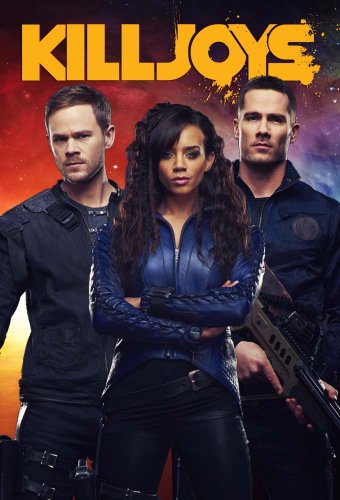