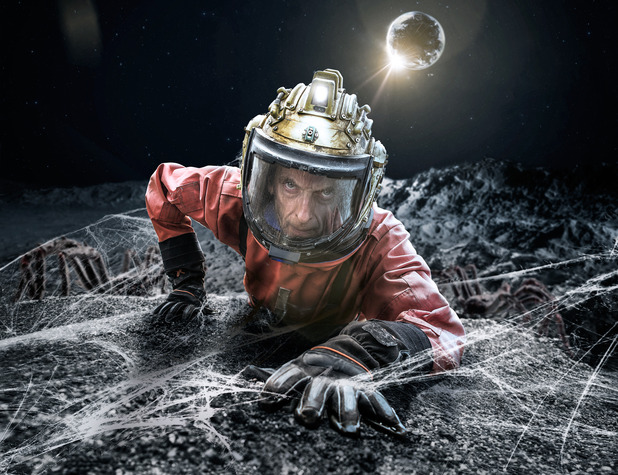 Having established himself as the caretaker at Clara’s school by hypnotising some poor guy into believing he had the flu, the Doctor now turns up at the school whenever he feels like it. Courtney Woods, the Disruptive Influence (Ellis George) now comes and goes from the TARDIS at will. Apparently the door is no longer locked and the days of the TARDIS keeping Clara out EVEN WHEN SHE HAD A KEY are gone. So Courtney is inside the TARDIS when the Doctor and Clara walk inside to talk about how the Doctor treated Courtney in the previous episode.

The Doctor loses his temper and takes Courtney to the moon to show her that she’s special by allowing her to be the first woman on the moon. In 2049.

They land on a space shuttle as it comes in to land on the moon. The shuttle has a hundred nuclear bombs on board; the Doctor knows this by glancing at one or two in the room.

According to the incredibly unscientific writing in this Doctor Who episode, everyone should have been flying around the cabin EVEN AFTER LANDING. AS IF THERE IS NO GRAVITY ON THE MOON. I’ll pay that the Doctor should have noticed the moon had ‘gained weight’ but he should never claim they’d fly around the cabin without leaping first.

And this weight comes and goes at random. Because that is how gravity works when an egg hatches or a baby is born. [faceroll]

Lundvik (Hermione Norris) is the commander in charge of the space mission to save the Earth. Ten years ago a Mexican mining mission failed with no survivors and no contact with the Earth. The moon suddenly gained weight at that time. High tides ‘everywhere all at once’ were devastating. (Where did all the extra water come from? A better question: when is Doctor Who going to get a half-way decent scientific advisor?)

No-one on Earth had space capabilities. Apparently the Mexicans went to the moon with absolutely no backup plan and no extry space ships even being built to bring back the expected mineral wealth.

The Mexican base featured lots of spiderwebs. No-one comments on the massive spiderwebs on the moon, as if ‘oh, yeah, this is to be expected ON THE MOON.’ As if it’s a Halloween house or something. There are also spacesuits without living bodies. And there are bloody enormous spiders who attack without warning.

Courtney was in the TARDIS to use some disinfectant to clean up her vomit before being whisked off to the moon. She gets in to a space suit, goes for a space walk AND SUDDENLY THE BOTTLE OF DISINFECTANT IS IN HER HAND IN THE MEXICAN SPACE STATION SO SHE USES IT AGAINST THE SPIDER-GERMS. Yeah, right.

Where did the enormous space-germs come from? We don’t know but we’re told that they’re feeding off the egg. How they got into the Mexican’s airtight space station is a mystery. Why they leave spiderwebs everywhere is a mystery too.

The moon is an egg. Did you miss that?

So. Back in Jon Pertwee’s day the moon came catapulting into the solar system. The Silurians expected it to bypass the Earth, ripping away its atmosphere, so they went into hibernation with their alarm clocks set for post-apocalyptic atmosphere return. But the moon didn’t bypass the Earth, nor did it rip away the atmosphere. Instead, the moon was captured by Earth’s gravity, becoming Earth’s satellite, becoming… the moon.

Apparently that and I don’t know how many other Doctor Who stories are now defunct because the moon is an egg that was laid 100 million years ago only to suddenly gain weight 10 years before it hatched.

And the big question, the question Clara asks at the beginning of the episode in a vain attempt to build dramatic tension is: do we let the moon hatch or do we kill the unborn baby to save the entire human race?

As. If. One life, alone, most likely unable to reproduce, and YOU’RE ASKING HUMANS TO CHOOSE TO DIE SO IT CAN LIVE???

Clara decides to let her children and grandchildren die so the moon can live. So does Courtney.

The Doctor is happy.

They stand on a beach on Earth to watch the moon hatching. Courtney tells us the hatchling laid an egg, which looks suspiciously like the moon and, miraculously, is in exactly the same orbit and is the same weight as the previous moon before it gained weight, so everything is fixed.

The Doctor pontificates about how humanity had lost the will to go to space but the sight of the moon hatching restored the space program, sending humanity to the stars to survive until the end of the universe. Blah blah, woof woof.

Then, because Doctor Who is run by Moffat, we have the extended denouement with Clara ranting and in tears because the Doctor left her to decide whether to allow the moon to live or die. Then Clara and Danny have a conversation. BECAUSE IT’S NOT DOCTOR WHO ANYMORE, IT’S CLARA. However, Danny’s comments about being angry with someone giving that person power over you are valid. Just look at the number of fans who are angry with Moffat because he has the power to make or break their week with the quality of his Doctor Who stories. And look at the number of people who are angry with those they call ‘Moffat-bashers’ because of criticism of Moffat. [shifty eyes] Danny has some wisdom; let’s pan for gold to make these eps worthwhile!

‘Kill the Moon’ was the last of my intermittent live-to-air-TV-watching episodes this season. I have it on good authority that the best episodes of this season are still to come, for which I’m deeply grateful.

I’m looking forward to a few better episodes before the end-of-season rant that will, if I can find them again, include some internet memes from people reacting to the finale episode of the season.