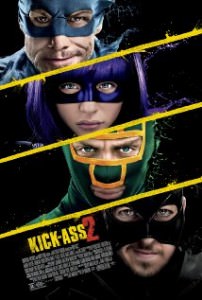 A review by Edward and Nalini Haynes

Kick-Ass 2 continues the adventures of Kick-Ass aka Dave Lizewski (Aaron Taylor-Johnson), the high school senior who began a costumed vigilante craze in the original Kick-Ass. Hit-Girl aka Mindy Macready (Chloë Grace Moretz) is attending Dave’s school while living with her guardian Detective Williams (Morris Chestnut). Mindy lies and covers up her ongoing Hit-Girl activities but she inevitably gets caught out. Williams tries to be a good father, encouraging Mindy to reclaim her childhood.

Chris D’Amico, formerly Red Mist, accidentally kills his remaining parent then renames himself the Motherf____r (Christopher Mintz-Plasse) in an attempt to follow in his father’s gangster footsteps. Chris raises an army of costumed villains, naming them all personally before instructing his assistant to organise costumes.

Needless to say, the good versus evil trope abounds as well as plenty of teenage coming-of-age angst.

Unfortunately the plot is a dog’s breakfast: a bit of steak here and a bit of offal there.

The original Kick-Ass was written and directed by Matthew Vaughn with Jane Goldman co-writing. The original comic book writers get credits too, of course: Mark Millar and John Romita Jr.. The original writers obviously know and love the genre in which they were writing.

However, the Kick-Ass 2 plot is so disjointed that the minion thought it was written by a committee or possibly different writers for the guys, Mindy and her alter-ego Hit-Girl. The minion also observed that the cinematography is distinctly inferior to the first Kick-Ass movie.

I thought the writer was doing it for money with no love and little understanding of the genre undermining his efforts to comply with or effectively subvert the tropes. I looked up KA2 on IMDB: relative newcomer Jeff Wadlow with a poor track record (mostly 4.5 to 6.9 out of 10 on IMDB) wrote and directed Kick-Ass 2 solo.

Chris D’Amico (Mother___) and Dave (Kick-Ass) follow the comedic coming-of-age comic book superhero tropes but Mindy diverts into the Mean Girls  ‘normal’ high school girl story-line after establishing that this was not going to happen. Apparently it’s acceptable for foster-daddy to organise play-dates for 15 year old girls as well (what planet is Wadlow from? Not this one, surely).

A few times Wadlow introduced a few potential twists — like the ex-Mob-enforcer who started a 12-step program for costumed vigilantes — then Wadlow ignores his gold mine to dig up some lumps of coal. Hopefully Santa found them useful.

There are other points where the plot is broken because we’re missing information or Wadlow is relying on ‘writer-puppet master’ tricks like some Jedi with delusions of grandeur “This will NOT break your suspension of disbelief. You will NOT ask why.”

Chekov’s gun is supposed to be seen BEFORE the fact, not explained AFTER the fact. Just sayin’.

The Bechdel Test referred to in the sub-heading is a simple gender-bias test requiring a movie to have two named women characters talk about something other than a man without a man present. (The rules have been slightly expanded since its inception in 1985.) This test is so prominent in global culture that Sweden’s government’s movie ratings system now refers to the Bechdel Test.

It’s a pity Kick-Ass 2 relies on the ‘Queen Bees and Wanna Bees’ trope to pass the Bechdel Test. I mean, really? You couldn’t have had two of the female costumed vigilantes talk to one another? It’s amazing that a movie with so many women revolves around the men, including Hit-Girl’s ‘daddy issues’ as a primary motivator for everything she does — even when she changes direction. By 180 degrees. Repeatedly.

Kick-Ass 2 is at least as bloody as the first Kick-Ass movie, making number 2 somewhat like a Tarantino movie but without a cohesive plot and without snappy dialogue essential to the comic book movie genre. Kick-Ass 2 has 6.8 on IMDB; I think this is overly generous. I’m giving it three stars because I don’t have half-stars to give it 2 ½.